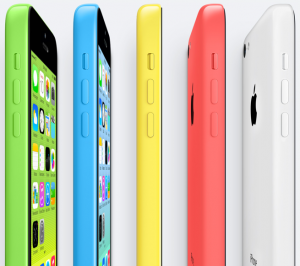 Apple’s September 9, 2013 announcement is proof that Apple has made the full transformation from innovation powerhouse to Just Another American Company.  If you’re not aware yet, today Apple announced the imminent release of two new iPhones.  The first is the successor to the current iPhone 5 and is dubbed the iPhone 5s. The second is a new, lower cost class of iPhone that is available in a variety of colors and is known as the iPhone 5c.

I’ll start with a look at the new iPhone 5s.  In short, the major improvements in the premium iPhone line are a much faster A7 64-bit processor, an improved camera which now brings HD to FaceTIme, support for up to 13 LTE bands, a fingerprint sensor, and a motion coprocessor.  From a pure innovation perspective, the last two items on the list are deserving of praise.  The fingerprint sensor brings to Apple, if done right, new way to interact with the device and with apps and can improve security by enabling dual-factor authentication.  The motion coprocessor is useful for competing with some of today’s emerging tools, such as those that track physical activity using the compass, gyroscope, and accelerometer.  The motion coprocessor requires less battery than the A7 processor, so these apps will have less impact on battery life.  The talk time on the 5S is 10 hours with standby time of up to 250 hours.  As has been the case for a while now, the 5s comes in three moels – 16 GB, 32 GB, and 64 GB – and carries a subsidized cost of $199, $299, or $399 depending on model.

The bigger change comes with the release of the lower cost iPhone 5c, which has a plastic housing and comes in a bunch of different colors.  The iPhone 5c, believe it or not, has the same retina display as the 5s, also sports an 8MP camera, and has the same battery life as the 5s.  The 5c, however, still carries the A6 processor, does not have a motion coprocessor, nor does it have a fingerprint sensor.  It seems as if the 5c is basically an iPhone 5 with a plastic case and a lower price.  The 5c comes in two models – 16 GB and 32 GB – at prices of $99 and $199, respectively.

Of course, Apple also announced the imminent release of iOS 7 as well.  iOS 7 is a full re-surfacing of the iOS interface with some new additions:

There are a lot more features included in iOS 7, which can be seen here.

It’s obvious that Apple has taken a new approach with this latest announcements.  While some of the iPhone 5s’ new features are good, they’re hardly revolutionary.  And, there was no “Oh… one more thing” item of any kind in today’s announcement.  Further, there was naught said regarding iPad and MacBook Pro.  All in all, it was a subdued announcement and everything had already been leaked to the press.

It’s clear that Apple is concerned about emerging markets and wants to make sure that they can be a player. The high cost of iPhone was threatening to cut Apple out of these markets as consumers in these spaces quickly scoop up Android devices as fast as they can.  Apple’s focus on high end devices and high margins is not a fit for these markets.  At the same time, Apple has set high expectations with regard to margins.  Investors have come to expect pretty high returns.  The unsubsidized cost of the iPhone 5c is $549 which is rumored to be a 40% margin, above Apple’s average of around 36%.  At the same time, the $99 with-a-contract price may be much more appealing to consumers in emerging markets.  Unfortunately, the attempt to the maintain margin could also backfire for Apple. Only time will tell.

In a global economy, even Apple can’t focus on just the high end of the market and expect constant continued growth, particularly as other companies catch up and even surpass Apple in pure technology terms while, at the same time, undercutting Apple’s prices.  With today’s announcement, Apple has proven that they are a company that will react to market forces in an attempt to grow share rather than just focus on breathtaking innovation to do so.

Today’s announcement was far from exciting in pretty much every way.  Like it or not for Cook, Apple is a company for which expectations are much, much higher than they are for others.  Any small misstep is perceived to be significant.  Today was, in my opinion, a misstep.  For all the effort that the company has put into the 5c and the 5s, there should have been a third model announced with a larger screen or the company should have announced something beyond “here’s a bunch of slightly updated and cheaper iPhones.”  New colors and a cheapened iPhone 5 with a new badge don’t seem to bring much innovation to the mobile space.

As I mentioned, I do see value in Apple’s inclusion of fingerprint recognition in the new iPhone 5s devices.  The technology has the potential to better secure highly-sought devices against thieves and can improve app security by enabling dual factor authentication with ease.  Unlike Android, Apple doesn’t have a fractured ecosystem with which to content, so adoption of such security measures could come quickly, if app developers are up to it.  It could also be eminently useful in BYOD scenarios.

Perception is, perhaps, Apple’s biggest challenge going forward.  The company that became known for it Next Big Things may just be maturing into a regular technology company now that the reality distortion field so deftly employed by Steve Jobs is a thing of the past.  As transformative as Apple has proven to be in the past decade – and this statement is coming from me, someone that didn’t used to be a fan of Apple in any way – one hopes that the company still has a few tricks up its sleeve and that this is simply the calm before the storm.