Best of theCUBE on Cloud

The next ten years of cloud will differ dramatically from the past decade. The early days of cloud deployed virtualization of standard off-the-shelf components to scale out and build a large distributed system. The coming decade will see a much more data-centric, real time, intelligent, hyper-decentralized cloud that will comprise on-prem, hybrid, cross cloud and edge workloads. With a services layer that abstracts the complexity of the underlying infrastructure.

This was a key takeaway of the guests from theCUBE on cloud (log in required), a virtual event hosted by SiliconANGLE and theCUBE, which brought together CEOs, CIOs, data practitioners, technologists, cloud experts, analysts and opinion leaders to unpack the future of cloud computing in the coming decade.

In this Breaking Analysis, we’ll summarize the findings of our recent event and extract the signal from our great guests with a series of comments and clips from the show and we’ll share some Wikibon market data and ETR survey content.

Decades of Cloud Innovation – What’s Next?

The graphic below lays out our view of the phases of cloud and the progression of innovation over time, and how we see the coming decade. 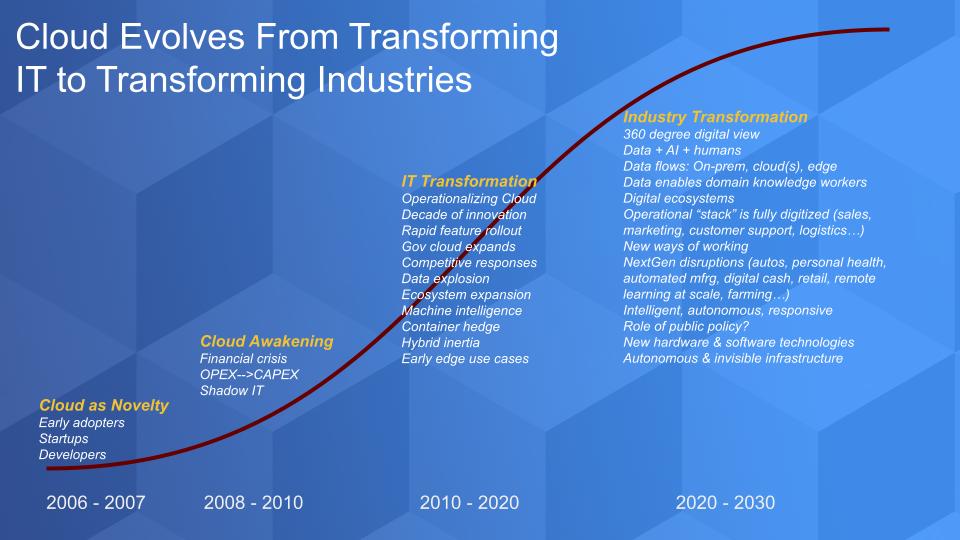 Cloud, like many innovations, started as a novelty. When AWS announced S3 in March of 2006, nobody in the vendor and user communities really paid too much attention. Then later that year it announced EC2 and people started to think about a new model of computing. But it was largely tire kickers and bleeding edge developers that took notice and leaned in.

The financial crisis of 2007 to 2009 really created a cloud awakening by putting cloud on the radar of many CFOs. Shadow IT emerged within departments that wanted to take IT in bite sized chunks as OPEX.

A Decade of IT Transformation

Organizations began to see the benefits of cloud in the form of the agility it brought and cost savings and value creation by re-directing the labor force. It catalyzed the DevOps movement and put developers at the center of IT transformation. Post financial crisis, we’ve been on an eleven year cloud boom. Cloud has disrupted the on-prem model and completely transformed the way we deploy and manage technology.

Deeper Industry Transformation is Next

Ironically, the pandemic hit at the beginning of this decade and created a mandate to go digital. A it accelerated this industry transformation that we highlight here, which probably would have taken several more years to mature – but overnight the “forced march to digital” occurred and is here to stay.

This next wave, we think will be much more about business or industry transformation. We’re seeing the first glimpses of that. Holger Mueller of Constellation Research summed it up very well at our event. Paraphrasing from his discussion on theCUBE atl the event, he said:

The cloud is the big winner of COVID. Normally we talk about 7-year economic cycles for planning and investment. Now we operate in 7 day cycles. Do we open or close the store? How do pivot to support remote workers. Without the burden of CAPEX. –Holger Mueller, Constellation Research

And we think that the focus areas listed on this chart are going to be front and center in the coming years. Data, AI, a fully digitized and intelligent stack will support next generation disruptions in autos, manufacturing, finance, farming and virtually every industry. The distributed system will expand to the edge and the underlying infrastructure across physical locations will be abstracted. Many issues remain, not the least of which is latency which we talked about at the event in quite some detail.

The Big 3 Clouds – The Rich Get Richer

The chart below shows our most recent estimates of IaaS & PaaS spend for the Big 3 cloud vendors. We’ll update this data after earnings season but here are the key points: 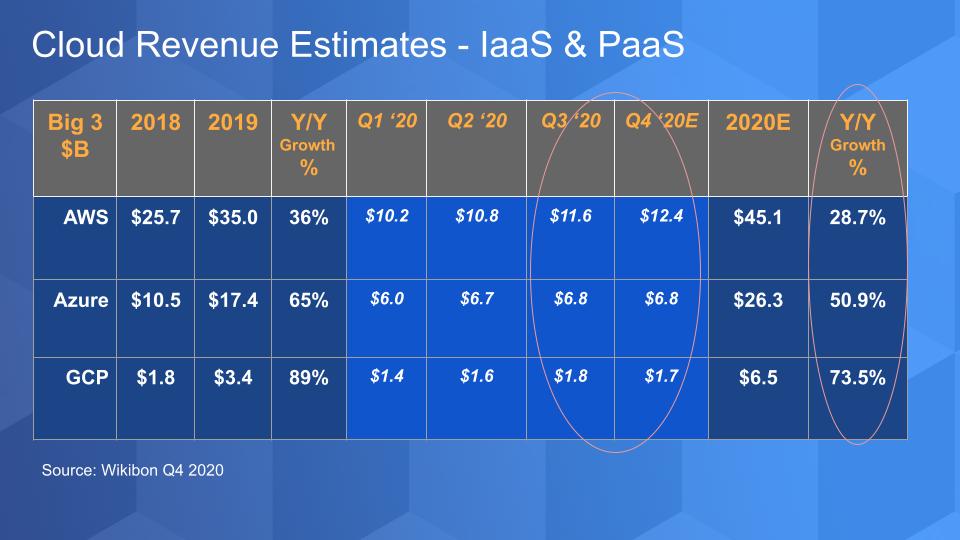 Combined Force of the Big 3: First point we want to make is that combined, the Big 3 accounted for almost $80B in infrastructure spend last year. That $80B annual spend was not all incremental. No — it’s caused consolidation in the on-prem data center business. Dell, EMC, HPE, IBM, Oracle and others have all felt the the heat and have had to respond with hybrid strategies.

Azure (and GCP) are Closing the Gap: It’s true that Azure & GCP appear to be growing faster than AWS. We don’t know the exact numbers because only AWS provides a clean view of IaaS and PaaS, whereas Microsoft and Google hide the ball on their IaaS numbers because they’re behind AWS. But they do leave breadcrumbs and clues – and we have other means of estimating. But it’s undeniable that Azure is closing the revenue gap with a large revenue base and a growth rate that’s 20 percentage points higher than that of AWS.

AWS Continues to Lead: However, despite the fact that Azure & Google are growing faster than AWS, AWS is the only company by our estimates, to grow its business sequentially last quarter. In and of itself that’s not significant. What is significant is that because AWS is so large at now $45B annually, even at slower growth rates it grows much more in absolute terms than its competitors.

We think AWS will keep its lead for some time. We think Microsoft and AWS will continue to lead the rest of the pack; and Google, with its balance sheet and global network will play the long game. Virtually everyone else with the exception of perhaps Alibaba, will be secondary participants in this cloud game.

Sizing up the Competition

This graphic below underscores this reality and lays out the competitive landscape. 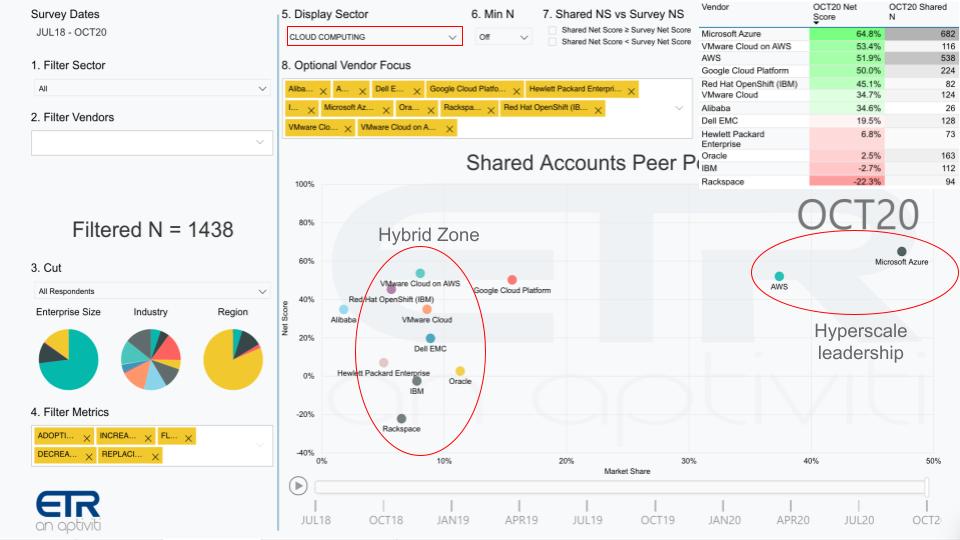 What we’re showing above is survey data from ETR of more than 1,400 CIOs and IT buyers. On the vertical axis is Net Score, which measures spending momentum and on the horizontal axis is so-called Market Share, which is a measure of pervasiveness in the data set.

Here are the key points:

Hyperscale Leadership: AWS and Microsoft stand alone. They are so far ahead of the pack that they’d have to fall down to lose their lead. High spending velocity and large share of market. We don’t think that will change. Google has the financial strength to continue to position itself as an alternative to AWS and as an analytics specialist. So it will continue to grow but Google will be challenged to catch up to the leaders in our view given the momentum and customer base of both AWS and Azure.

Hybrid Becomes Real: Now take a look at the hybrid zone – where the field is playing. These are companies that have a large on-prem presence and have been forced to initiate a coherent cloud strategy, including multi-cloud. This includes Google because they’re behind they have to take a differentiated approach relative to AWS. And you can see some real progress from the on-prem crowd. VMware Cloud on AWS stands out as does Red Hat OpenShift, which is “cloudy” although really is not broad IaaS specifically. And VMware cloud – which includes VCF – VMware Cloud Foundation – and even Dell’s cloud. We would expect HPE with its GreenLake strategy to be picking up the momentum in future quarters.

Captive Clouds: And then there’s IBM and Oracle. They are in the game but they don’t have the CAPEX chops to compete with the hyperscale leaders. IBM’s cloud revenue actually dropped 7% last quarter. So that highlights the challenge. Oracle’s cloud business is growing in the single digits and again underscores that these two companies are about migrating their software installed base to their respective captive clouds. As well, IBM for example has launched its financial cloud as a way to differentiate and not take AWS head on in infrastructure.

The bottom line is that other than the Big 3 and Alibaba, the rest of the pack will be plugging into, hybridizing and cross-clouding those platforms. And there are definitely opportunities there, specifically related to creating an abstraction layer that hides the underlying cloud infrastructure…and importantly creates incremental value.

How the Experts See the Future of Cloud

So what’s that look like? Well let’s hear from the community and theCUBE on cloud highlights. Unfortunately we don’t have time to show you clips from every speaker. We have ten plus hours of video content. But we’ve tried to pull some comments that summarize the sentiment from the community. You can play the video below to see the highlight reel of the comments.

What is theCUBE on Cloud

John Furrier briefly describes what thecube on cloud is all about and then let the guests speak for themselves.

A New Architecture for Cloud

After John, Pradeep Sindhu gives a nice technical overview of how the cloud was built out and what’s changing. I’ll give you a hint…it has to do with data.

The Future of Cloud Storage

Then Mai-Lan Bukovec, who heads up AWS’ storage portfolio explains how she views the changes in cloud…and…DATA requirements.

One of the themes you’ll hear from guests is this notion of a distributed data architecture and Zhamak Deghani who is a data architect explains her view of the world ahead.

We have the thoughts from analysts Zeus Karavalla and Maribel Lopez on the future of cloud.

How Microsoft & Google See the Future

We also clipped some comments from both Microsoft and Google to complement AWS’ view of the world. In fact we ask JG Chirapurath from Microsoft to comment on the common narrative that Microsoft’s products are not best-of-breed, rather they’re just “good enough.” And Paul Gillin asks Amit Zavery of Google his thoughts on the cloud leaderboard and how they think about Google’s third place position.

The Relentless Progression of Technology

Dheeraj Pandey gives his perspective on how technology has progressed and been “miniaturized” over time – and what’s coming in the future.

Dealing With Latency at the Edge

Then Simon Crosby gives us a framework to think about the edge as the most logical opportunity to process data, not necessarily a physical place? This was echoed by John Roese, who talked about the four attributes of workloads that should live at the edge; and Chris Wolf, who discussed the differences seen in edge workloads. These are two experienced CTOs who went into some great depth on this topic and it’s worth watching their full interview.

The highlight reel ends with CEO Joni Klippert talks about the changes in securing cloud data from a developer angle.

Practical Advice From a CIO

And finally we wrap with a CIO perspective. Dan Sheehan provides some advice, building on his experience as a CIO, COO and CTO. Specifically how do you as a business technology leader deal with the rapid pace of change and still be able to drive business results.

There’s so much other content on theCUBE on Cloud event site. We have other CIOs – like Cathy Southwick and Alan Nance. The CEO of UiPath, Daniel Dines talks about automation in the cloud. Ana Pinczuk from Anaplan (not her company btw), Dave Humphrey from Bain on his $750M investment in Nutanix, Rachel Stephens from RedMonk on the future of software development in the cloud, CTO Hillery Hunter talks about the cloud going vertical into financial services.

And of course, John Furrier, Dave Vellante, along with special guests like Sarbjeet Johal share our take on key trends, data and perspectives.

Thanks to theCUBE community and all the guests. You can see summaries of the content produced at theCUBE on Cloud on the SiliconANGLE Web site. As always we’d love to hear your feedback.

Remember these episodes are all available as podcasts wherever you listen. Check out ETR’s Web site. We also publish a full report every week on Wikibon and on SiliconANGLE. 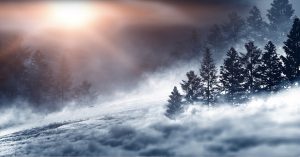 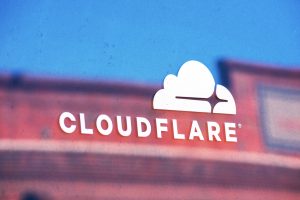 Breaking Analysis: Cloudflare’s supercloud…What multi-cloud should have been 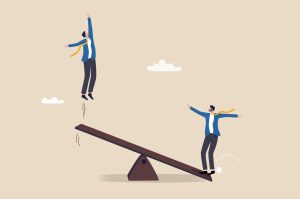 Breaking Analysis: Even the cloud is not immune to the seesaw economy