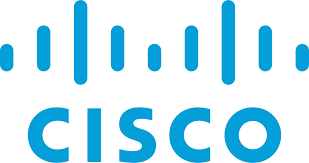 Welcome to this week’s Breaking Analysis. In this episode of theCUBE Insights, Powered by ETR, we dig into the business of Cisco Systems.  theCUBE is in Barcelona this week to cover Cisco Live Europe with an expected attendance of about seventeen thousand. For the past several weeks we’ve been reviewing Cisco’s long history of acquisitions and setting our editorial agenda for covering this event generally and Cisco specifically.

Today, Cisco is a company in transition. It remains a leader in its core networking segments, which continue to fuel the company’s financials, but the firm is refocusing its business for the next decade having shut down a number of initiatives over the last several years.

Here’s a bit of background on how we got here. Near the end of the dot.com bubble, Cisco was the most valuable company in the world with a $500 billion dollar market cap. It was one of the four horsemen of the Internet along with Oracle, Sun and EMC.

Cisco rose to prominence by betting big on Ethernet. Old reliable TCPIP was the lynchpin of the Internet and allowed Cisco to power the wave that decimated the minicomputer industry in the 1990s. There were many levers that Cisco pulled brilliantly during its ascendency. Here are two:

Cisco diversified quickly into a conglomerate with a portfolio that spanned video, set top boxes, telepresence, compute, collaboration, security, wireless…at one point Chambers talked about dozens of adjacent businesses, each of which would account for one billion dollars of incremental revenue. Many if not most didn’t pan out and Chambers slashed and burned prior to handing the reins to current CEO Chuck Robbins.

Under Robbins Cisco is in some ways, going back to basics and is definitely more focused. They’re betting on sure things including datacenter, wireless, collaboration, security and the edge. Cisco is also evolving its model toward software subscriptions.

In this research note, we want took at how some of those bets are performing. We’ll discuss the impact of cloud on Ciscos business and drill into its performance in networking, collaboration, security and hyper-converged. Finally we’ll will close with some things to watch as barometers of success over the next eighteen to twenty-four months.

Cisco Financials at a Glance

The first thing we want to share is a snapshot of Ciscos financials today: 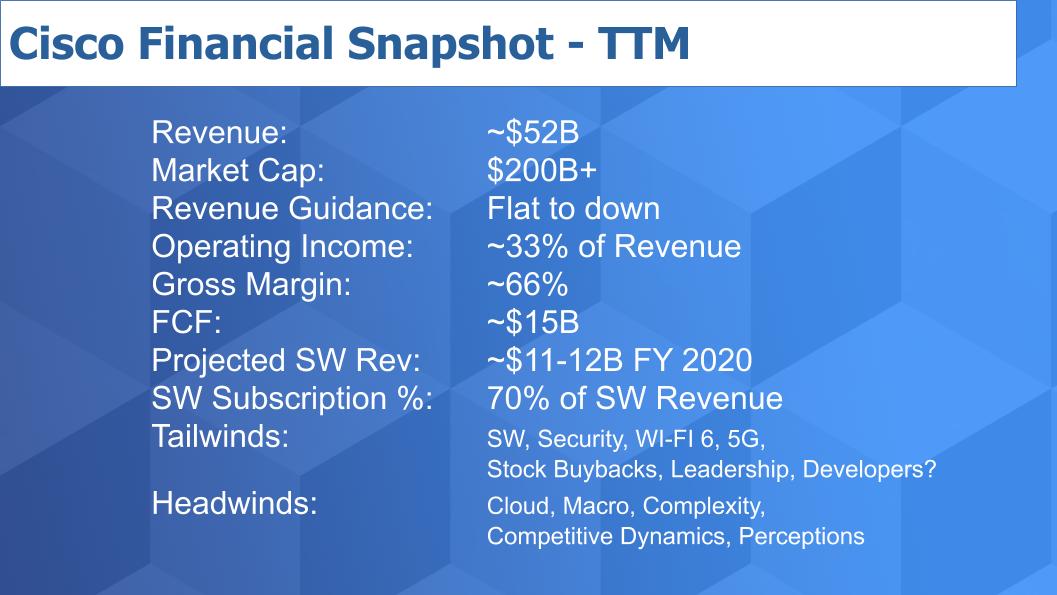 The chart above shows some KPIs on a trailing twelve month basis. Cisco generates around $50B annually, with a $200B market value. At a 4X revenue multiple it has a solid valuation for a company viewed as a traditional hardware player. Cisco is guiding analysts on a flat to down quarter and talking about a challenging macro environment, despite the stock market’s seemingly insurmountable rise. Cisco is a very profitable company with 33 percent operating margins and a very nice 66 percent gross margin.

Cisco is riding some big waves, vectoring its business into markets with momentum. It continues to add software to its portfolio. Security grew at 22 percent last quarter. WIFI 6 and 5G should kick in by 2021. Cisco uses a chunk of its cash to buyback stock to keep the street happy and it’s leveraging a leadership position to compete. Further down in this piece we’ll comment on Cisco’s developer strategy and its DevNet group.

There are some headwinds. Cloud is slowly but steadily challenging its on-prem business. The macro demand picture has been cited as challenging by Cisco management. The company continues to have a complex portfolio, which often makes it hard for customers and sellers to match solutions with need. And finally, the perception that they’re an aging hardware company still largely in the business of selling ports.

Cisco as the Networking Leader

Let’s look at some of the spending data from ETR and specifically, Cisco’s position in its core networking space. 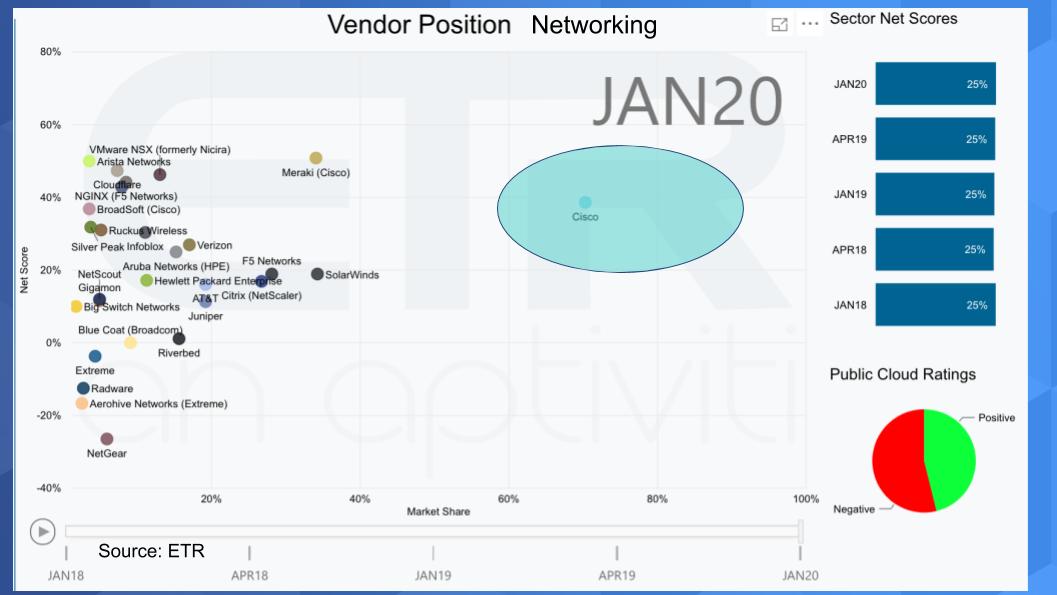 The chart above shows Cisco’s position in its core networking segment. The data from ETR depicts marketshare over time on the X-Axis, which is a measure of pervasiveness and Net Score on the Y-Axis, which measures spending velocity. The blue oval depicts the range of Cisco’s position over the past five surveys.

Look how Cisco maintains its leadership far outpacing others in the sector each quarter. Below, we make some comments on the sector overall but notice the net score in the blue bars to the right – which, again, is a measure of spending velocity. It holds firm at 25 percent – not great but holding steady. And you can see the pie chart of the public clouds impact on the sector and the red pie slice underscores the fact that the public cloud is directly competing with Cisco for budget. 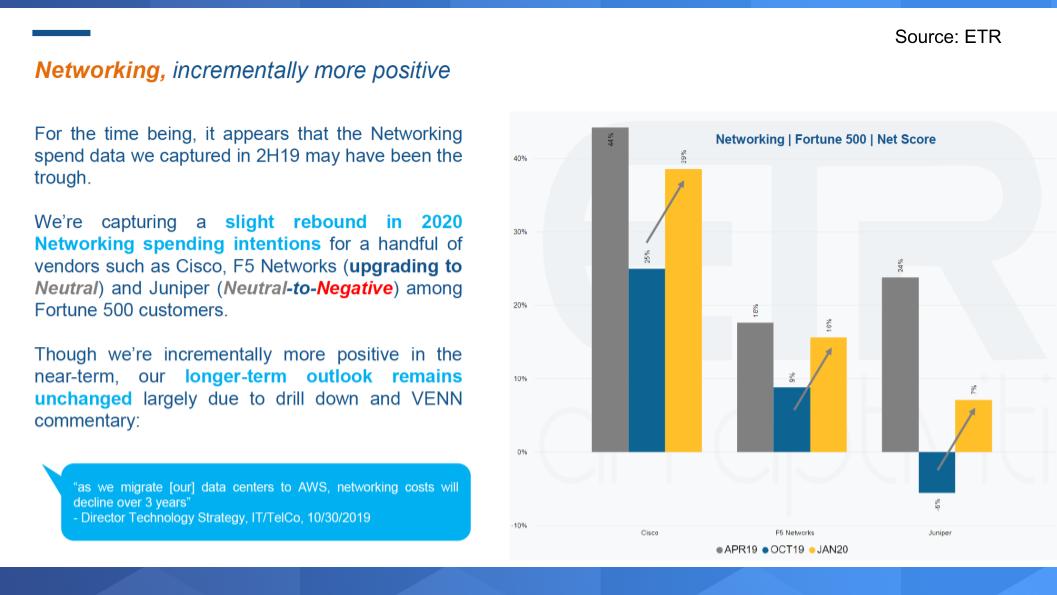 The chart above shows Net Score of spending intention (i.e. spending velocity) comparing Jan 2020 results (yellow bar) with previous periods. This data is filtered on the F500 buyers. You can see there’s an uptick in momentum for networking generally and Cisco is cited in the narrative as rebounding and showing some strength along with Juniper and F5.

But look at that blue callout. It’s from an ETR Venn discussion with an IT buyer who essentially says as we move tot he cloud we will spend less on networking. And Cisco as the leader is of course the most exposed to this trend.

Using the ETR query tool, we can answer this question. In the chart below, we’re filtering the data set on organizations that are spending on AWS, Azure & Google Cloud Platform and showing Cisco’s performance – measured in market share or pervasiveness – in these big cloud accounts. You can see theres an N of 809 cloud customers and 480 Cisco customers within those accounts. And you can see the impact that the cloud is having on Cisco – much the same way it is affecting virtually every large supplier of on-prem infrastructure. 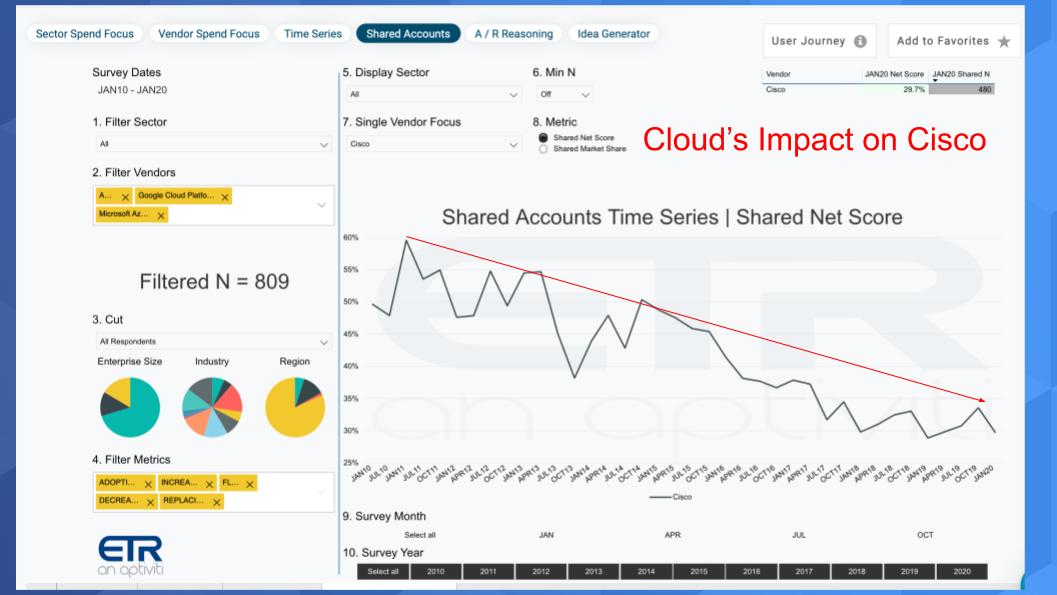 It’s not surprising that you see a slow, steady decline over the past ten years. And you can see a net score which measures spending intensity in the upper right corner of 29.7 percent which is somewhat lower than Cisco’s average in the data set.

The story is not just about cloud. There are other waves in the industry or what we’ve referred to in the past as “Innovation Cocktail” ingredients…namely Data + AI + Cloud. So the next question we want to pose is how is Cisco doing in leveraging these waves? 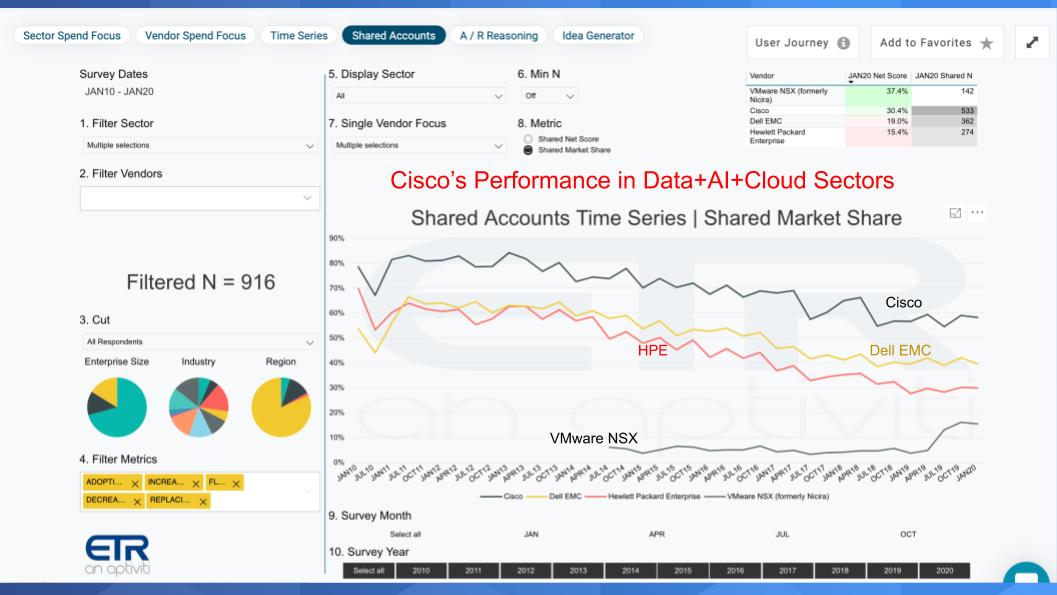 In the above chart we have 916 customers in these superpower segments of Data, AI and Cloud combined. We show the marketshare – or pervasiveness – over time of Cisco as compared to VMware’s NSX, HPE and Dell EMC. What the data shows is a couple of points.

The takeaway is Cisco is holding its own in these power segments. Its challenge in our view is to: 1) use data and AI to create better customer experiences – i.e. be a consumer of AI as a means of better serving customers; and 2) compete in the multi-cloud market directly with these players (none of whom own a public) and others (such as IBM) who does have a public cloud play.

We highlighted earlier, Ciscos portfolio breadth. So let’s look at some of the ETR data and see how various parts of their business are faring.

The chart below shows the net score or spending velocity across Cisco offerings including Meraki – which is wireless, App Dynamics – AppD is application performance management, Cisco overall, Cisco Umbrella – which is cloud and DNS security and Springpath, a 2017 acquisition which comprises infrastructure for Cisco’s hyper-converged offering. 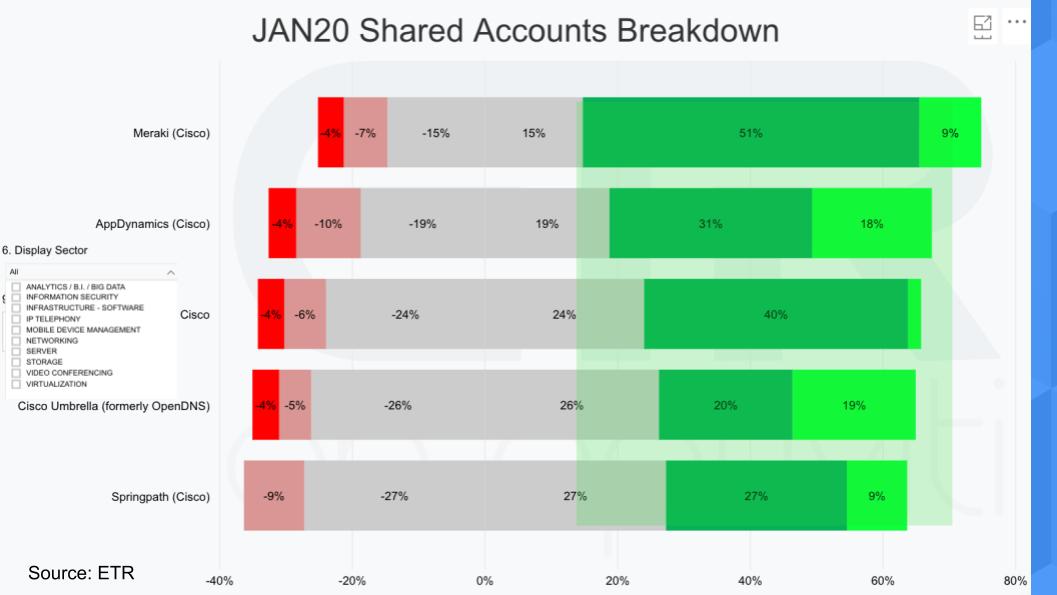 And you can see above the segments in which Cisco plays – there are 10 in the ETR taxonomy spanning analytics, security, mobile device management, infrastructure, video conferencing, etc. In the interest of time we’ll point out that red is a sign of spending deceleration whereas greed is higher velocity. Gray is neutral…and again Cisco is holding its own in these major segments with decent spending velocity. Springpath is a bit soft and we’ll make some comments later on in this post.

Workforce Transformation & Collaboration is a Key Market for Cisco

Lets take a look at an area that is likely to get a lot of attention at Cisco Live Barcelona, Collaboration 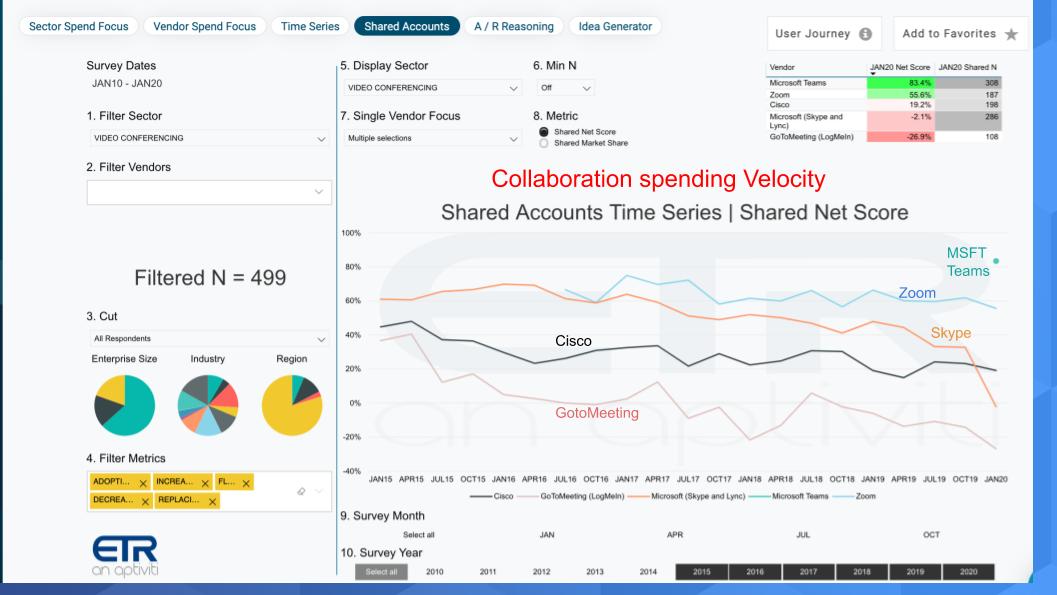 This ETR chart above shows Net Score or spending velocity for Video Conferencing platforms. And you can see Cisco has some work to do as its Net Score is teetering on the red zone so expect some continued enhancements there. Comparatively you can see GotoMeeting losing steam and Skype falling off a cliff in the January survey. However but look at Microsoft Teams – that blue dot in the upper right – with very strong momentum. So Microsoft is going to migrate its Skype and Lync installed base to teams and is very well positioned. You can see as well, newcomer Zoom is right there in the mix across this sample of 500 buyers.

Security is a Major Play for Cisco

Let’s focus for a moment on all-important security sector.

The chart below shows Net Score or spending velocity in the cyber security sector. Cisco is both large and credible in this space – its security business grew 22% last quarter and it’s $3.2B run rate business for the company. Cisco’s spending momentum is not as strong as Palo Alto Networks, as shown here, and its not as high as the “rocket ship companies” like CrowdStrike, Okta, Cyber Ark, or Sailpoint…or some of the others that we’ve highlighted in previous Breaking Analysis episodes…but its solid.

And you can see the likes of IBM and Symantec who are leaders in security but their spending momentum or Net Score is in the red. So once again we see this theme of Cisco as a large player with a credible story playing out. Clearly this is going to be an area of focus at Cisco Live Barcelona. 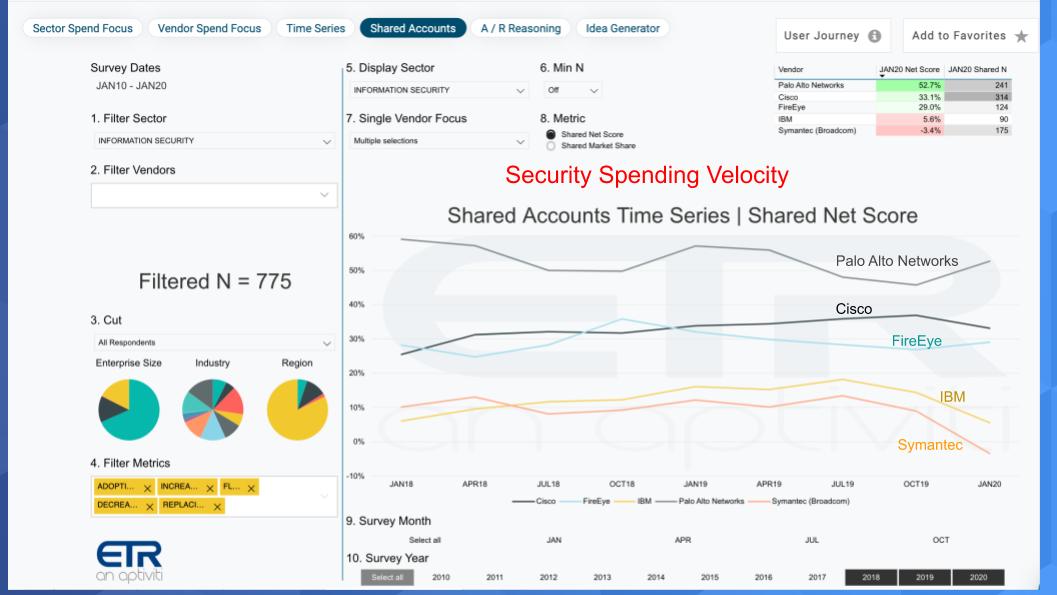 Cisco has to Walk a Fine Line in Hyper-Converged

So this next data point is kind of interesting and looks at Ciscos data center business and specifically Im trying to better understand whats going on with hyper-converged, the software-defined platforms that bring together storage compute and networking.

The power of the ETR platform is that you can ask the question: How are the hyper-converged players doing inside of Cisco accounts?  What we’ve done in the chart below is filtered on 458 Cisco accounts in the ETR data set, across 3 sectors, storage, compute and networking. And we’ve have isolated on Nutanix, VMware vSAN, Cisco itself, and Dell EMC with VxRail. And we are showing Net Score or spending velocity for each company. 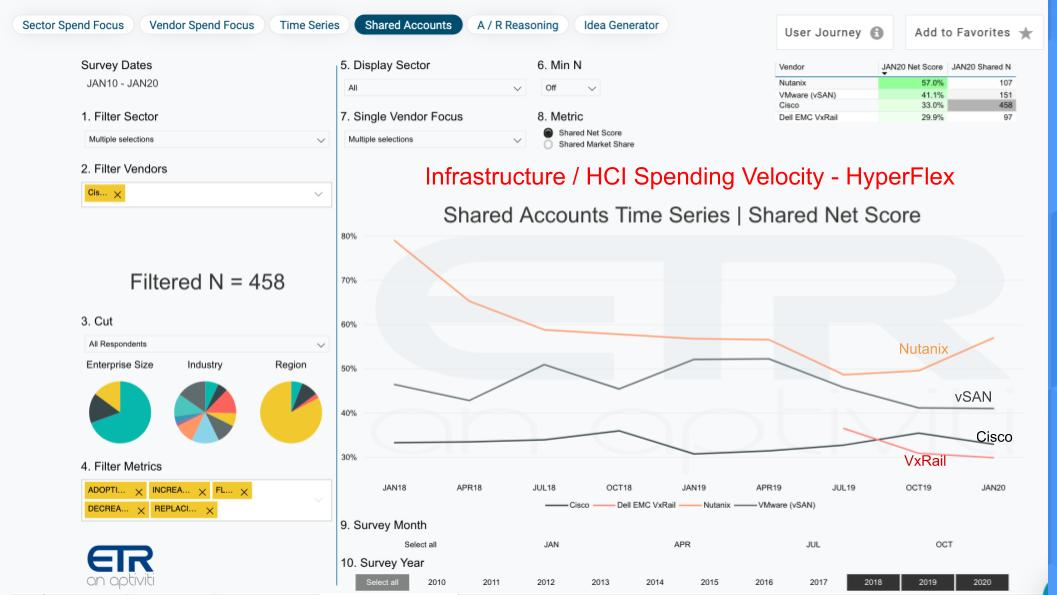 The first thing to point out is that all the vendors have Net Scores in the green. That’s because this is a growing market that still has legs. Nutanix has noticeable momentum ahead of vSAN, Cisco and Dell EMC.

Here’s the thing about Cisco though. On the one hand it’s putting out its own HyperFlex platform based on the Springpath acquisition. But it has to tread carefully because it partners with converged players – i.e. NetApp with FlexPod and IBM with VersaStack – and its own Hyperflex – as an HCI play – is designed to replace these converged platforms. The same is true for the vBlock business with Dell EMC but Cisco and Dell are at each others throats so they’re happy to compete.

What should we look for going forward with Cisco? We’re watching six key barometers:

Lots to  to digest with Cisco. Tweet @dvellante or comment in this LinkedIn feed or email david.vellante@siliconangle.con if you have additional thoughts. 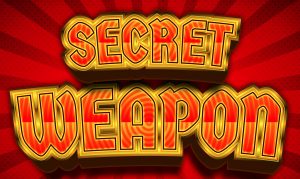 Breaking Analysis: Learnings From the Hottest Startups in Cybersecurity & IT Infrastructure