Whether CIOs recognize it or not (yet), Software is Eating the World, and there’s a good chance that their industry might be next on the menu. The emerging PaaS platforms (Cloud Foundry, Heroku, OpenShift, Docker) are all evolving to capture the mindshare of developers. While the PaaS battles are still in early days, Cloud Foundry is emerging as a leading open source platform and ecosystem to build and deploy the new Cloud Native applications that are driving these economic changes via software. But this Platform-as-a-Service (PaaS) model requires changes to technology, skills (people) and internal IT processes. This means enterprises need to become familiar with this development and operational model to best understand how they can accelerate using Cloud Native applications to give themselves a business differentiation.

The promise of Platform-as-a-Service (PaaS) is a cloud model that allows developers to just write applications and not have to worry about how the underlying infrastructure works. The business value being faster deployment of revenue generating or differentiated applications. Various PaaS platforms have been in existence since the mid-2000s, with language-centric platforms such as Heroku (acquired by Salesforce.com) Windows Azure and Google App Engine. While they attracted some developers and web start-ups, they failed to attain widespread Enterprise adoption.

Introduced in 2011 as an open source project from VMware, Cloud Foundry changed the PaaS model in three significant ways:

Over time, VMware spun off the Cloud Foundry organization into Pivotal, the Cloud Foundry project moved under the independent Cloud Foundry Foundation. This provided transparency, governance and a defined model for (vendors, ISVs, customers, cloud providers) to participate in the projects. 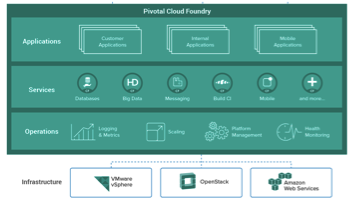 The Now: The Ecosystem, Foundation and Competition

While Cloud Foundry is not the native operating environment on mega-clouds such as AWS, Microsoft Azure and Google Compute Engine, it can be deployed on any cloud. For example, Pivotal Web Services runs on AWS, and Microsoft Azure recently account Cloud Foundry as a native service on their cloud. IBM BlueMix runs on the global SoftLayer cloud data centers.

In order to drive architectural consistency and interoperability of implementations between vendors, the Cloud Foundry Foundation was established in 2014. Application portability between clouds and reduction of vendor lock-in are critical requirements for Enterprise IT organizations, so maintaining a high level of consistency will be a crucial measuring stick for the Foundation. This interoperability will not only let the various contributors focus higher in the stack, but also leverage the variety of private and public IaaS infrastructures to run these new Cloud Native applications.

The competitive landscape for Cloud Foundry will have several factors and layers.

The Conversation: Transformation to Software-Centric Enterprises

While startups like Uber, AirBnB, Square, Tesla, eSurance, Twitter and many others are disrupting established industries, they lack the legacy application portfolio that burdens many Enterprises. So what’s the blueprint for established companies to mange this transition and make software a core competency?

There is no doubt that Cloud Native applications are changing both the economic and technology landscape for most Enterprise organizations. But how to get there has many options. PaaS such as Cloud Foundry is one option that has significant potential, but it involves multiple levels of change to any organization. It’s critical for IT leadership to quickly gets practical experience with multiple models to understand which one best aligns to the company culture, skills and business