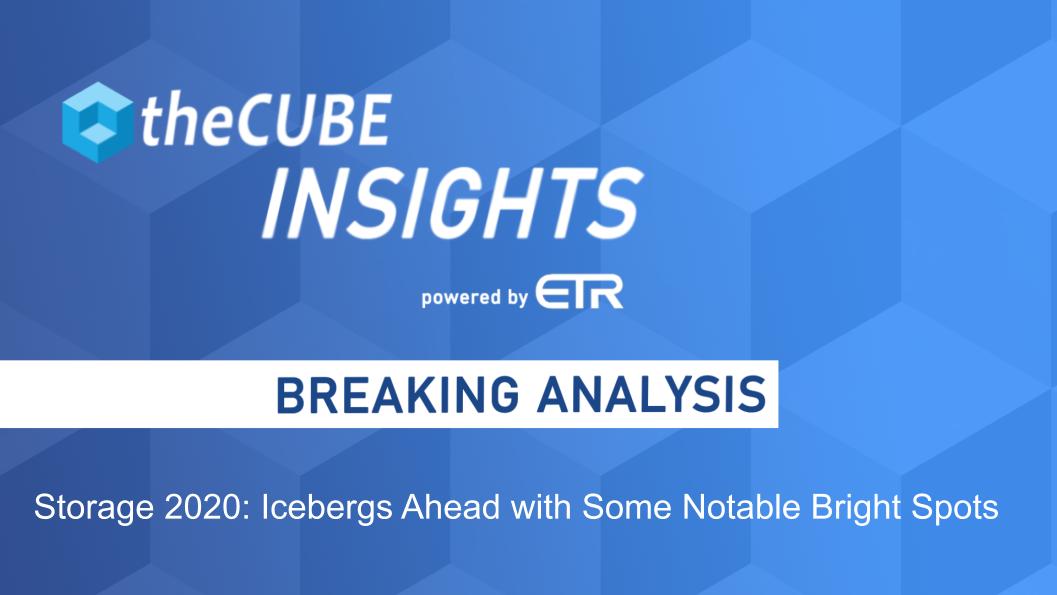 Data storage has always been a very lucrative market. In this week’s Breaking Analysis we look into the storage market. Storage has been soft lately, as we’ve been reporting. Spending has been on the back burner. In this segment we want to highlight those few companies with momentum, understand why there’s a softness, drill into the various segments and forecast the outlook for 2020.

Few Storage Companies with Momentum – Rubrik and Cohesity are Standouts

Let’s get right into it and look at a storage spending snapshot.

We’re looking below at Net Score, which is a measure of spending velocity in the ETR data set. We’re specifically isolating on storage spending. On the left hand side is the full respondent base of 1,161 IT buyers for each storage company. On the right side is storage spending with a filter on Giant Public and Private (GPP), which are the largest organizations, including big private companies. There are 403 respondents in this category. According to ETR, GPP are a strong bellwether of spending.

The first thing that jumps out at you on this chart is only a third of the companies are in the green and very few solidly green. Having two thirds of the respondent base in the red zone is an indication of spending softness. 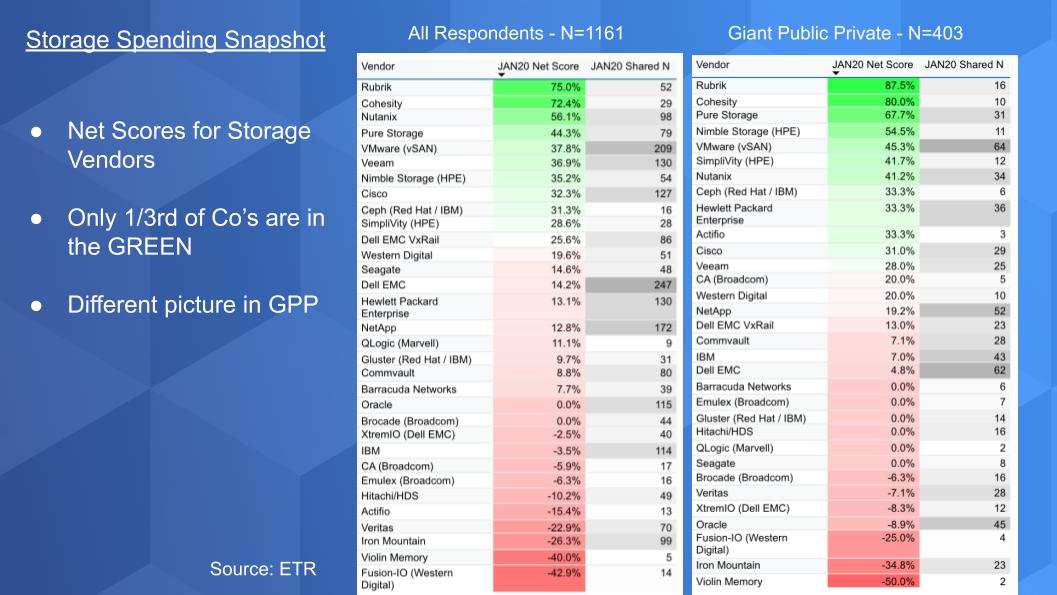 That said, on the left hand side, you can see some companies with clear momentum. In particular Rubrik and Cohesity are very strong with Net Scores well into the 70% range. You can see Nutanix with continued strength at 56%, Pure Storage clocking in at 44% – somewhat softer than last quarter but well ahead of the other primary storage players. Then vSAN from VMware, Nimble from HPE, etc.

Now let’s take a look at the right hand side of the chart, the Giant Public and Private buyers. You see some meaningful changes. Rubrik and Cohesity get into rarified air in the 80%+ range. Nutanix drops in these larger accounts with lower spending velocity (41% vs. 56%) Pure gets a big uptick to 68%, vSAN jumps up to 45%, Nimble bumps up to 54%…Dell EMC drops down into the single digits, which is a bit of a concern, HPE is in the red on the left but in GPP jumps up to 33%. Veeam, which as we’ve said has a bigger presence in smaller accounts drops down to 28%. NetApp looks better in GPP but still teetering in the red zone.

I also want to call out Actifio, a firm that pioneered the copy data management space. They’re weak in the total sample on the left but they jump up to 33% in GPP…albeit with very a small N. Nonetheless, this makes some sense as Actifio is going after some challenging problems in large companies like database, data protection and data management.

Storage is a tale of two or even two and a half markets. On the one hand, as we’ve said previously, primary storage is on the back burner right now. Secondary storage on the other hand is where most of the action is. 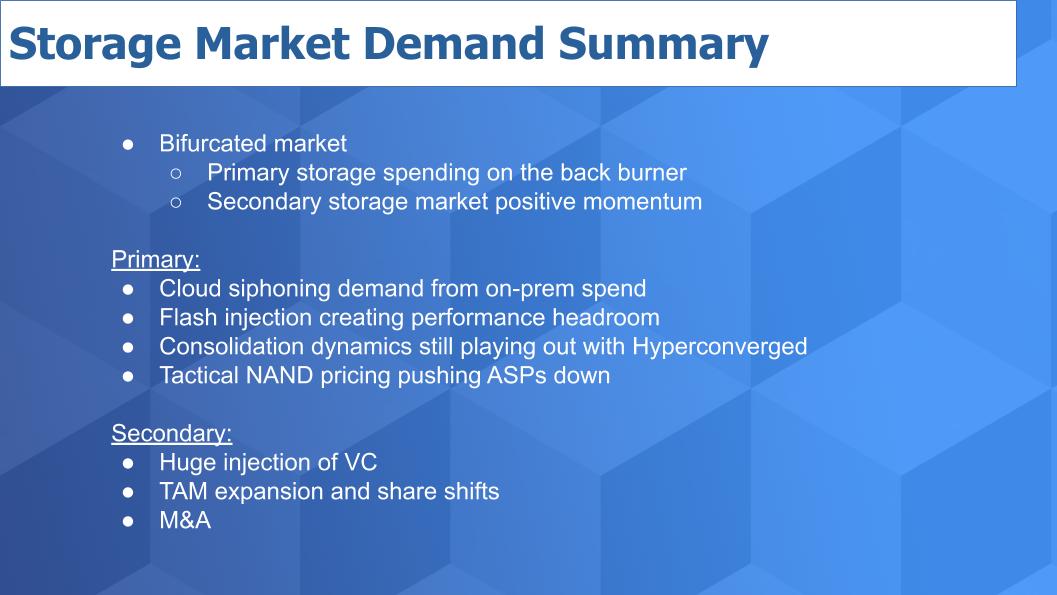 For primary storage, we cite four primary factors as shown above, that are creating headwinds for companies:

In the secondary storage market, we’ve seen a huge influx of funding, largely consumed by three companies, Cohesity, Rubrik and most recently, Veeam via its $5B exit and its 2019 $500M investment (most of which likely went to its founders, versus into market development). Notably, we’ve seen the two upstarts, Cohesity and Rubrik, invest in re-defining backup to expand the conversation to data management. A somewhat vague term but it encompasses data protection, cyber security (e.g. ransomware protection), analytics, devops, and other adjacencies to primary storage.

The consolidation in primary storage has left only two $1B+ (in revenue) independent storage players, Pure and NetApp. As seen in the chart below, of the largest players, only Pure has a Net Score (i.e. spending intention velocity) in the green. Dell EMC, HPE, NetApp and IBM are all in the red zone as shown in the chart below. 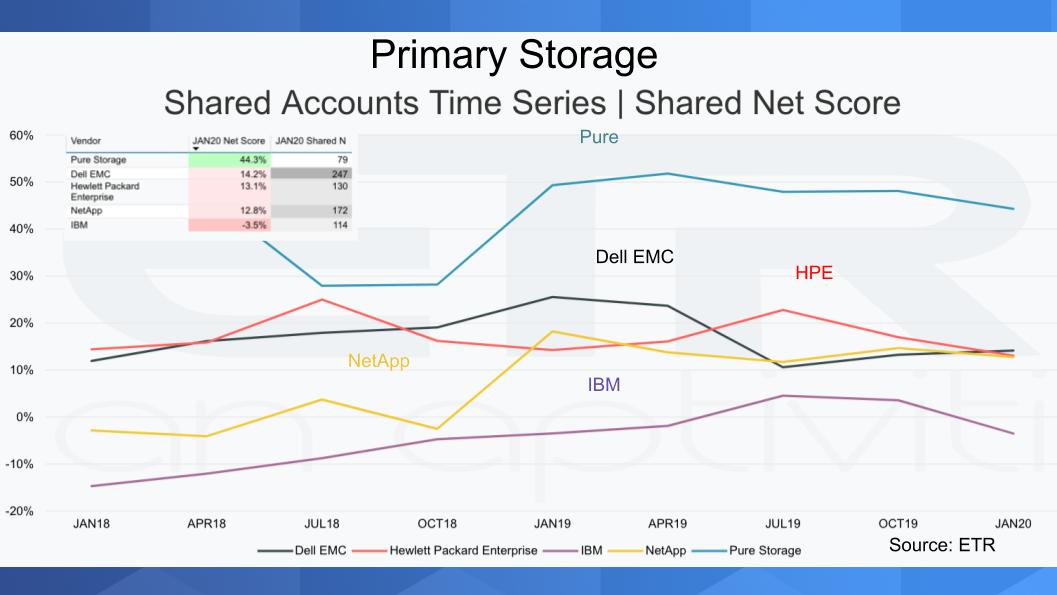 The competitive dynamics in primary are such that Pure continues to be the only rapid and clear share gainer of the “bigs,” however its rate of growth is slowing, which will in our opinion, pressure CEO Giancarlo to expand Pure’s total available market (TAM).

Dell EMC has recovered from its “storage nap” and is slogging through a portfolio rationalization and continued organizational tweaks. HPE has squeezed the 3PAR lemon and is riding the Nimble wave, with some success but thus far it’s not enough to power sustainable high growth. NetApp is perhaps is the most interesting and could be the canary in the coal mine for 2020. In other words if it sees continued softness that’s a negative sign for the overall sector whereas if this quarter’s report provides better guidance to the street it could be a sign of renewed spending.

The bottom line here is that because of the factors mentioned earlier, the tide is not rising for all ships and battles for market share are increasingly important. Spending in storage appears to be contracting in 2020, relative to 2019, but not falling off a cliff. Expect 2020 outcomes in primary storage to largely hinge on tactical issues like product cycle execution and NAND pricing.

Data Protection – The Cool Place to be in Today’s Market

The secondary storage market is still dominated by backup use cases but the TAM for vendors is expanding as: 1) cloud native initiatives drive the need for agility and new backup targets; 2) buyers want to get more out of their backup spend than just insurance; 3) organizational edicts related to security, privacy, data protection and recovery are intensifying; 4) buyers are open to replacing their current backup software vendor; as 5) new architectures, features and capabilities scratch the itch from #2.

The chart below shows Net Score – or spending velocity – for pure-play data protection players. Note how Rubrik and Cohesity have jumped to the top of the list with spending Net Scores among some of the best in the ETR data set – in any sector. Veeam as we’ve previously reported is solid and does well in smaller accounts while Commvault and Veritas, along with IBM and Dell EMC (neither shown) are battling to keep customers loyal to their platforms by adding new features, functions and price/performance improvements. 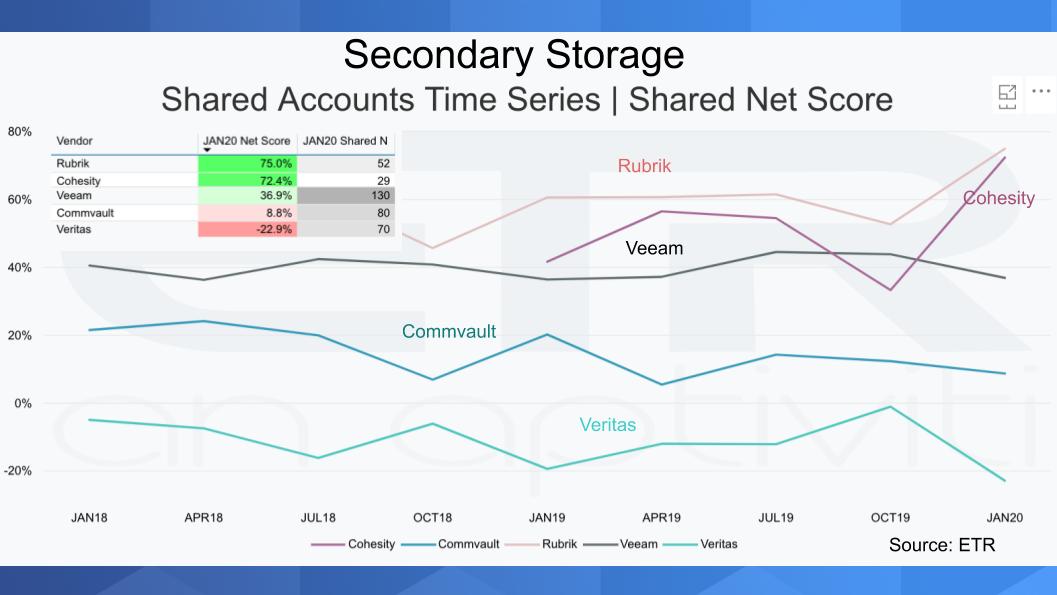 [Note: The ETR taxonomy does not currently have a specific data protection segment in its taxonomy so we use what are generally considered pure play backup vendors as a proxy for the market.]

Hyperconverged Continues to have Momentum 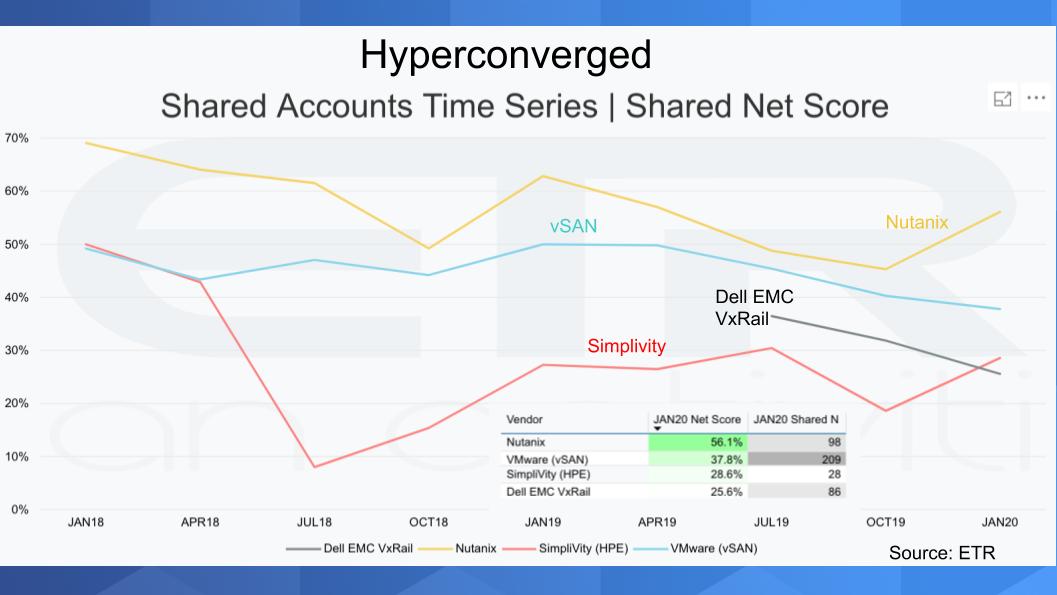 As seen in the chart above, Nutanix continues to lead this space with a 56% Net Score, which is an indicator of spending intensity or velocity. VMware’s vSAN has challenged Nutanix and caused friction in the market between the two firms; and as seen in the first chart, VMware’s vSAN is performing better (in terms of Net Score) in Giant Public and Private firms than Nutanix. HPE’s acquisition of Simplivity is in the neutral zone as is Dell EMC’s VxRail. A concern for VxRail (and Dell EMC overall) is within GPP as the company doesn’t appear to be performing as well in this segment, which is often a bellwether of future spending in the ETR dataset.

The Cloud will Continue to be a Headwind

As we entered the last decade, on-prem giants put on a game face that the world was hybrid and the cloud would ultimately become an opportunity, not a threat. 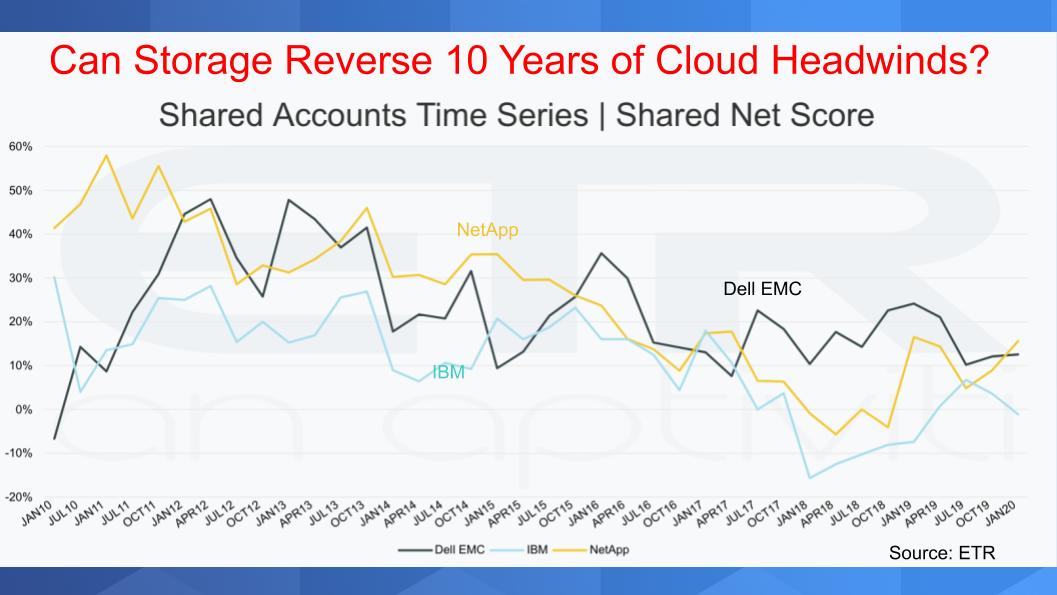 The chart above shows the ten year Net Score (spending velocity) profile for three large on-prem storage vendors, Dell EMC, NetApp and IBM. We could have added HPE and it would show the same trend but the chart gets too busy. The point is the highs get lower as do the lows.

Cloud has clearly pressured on-prem storage spend in the last ten years. It remains to be seen if cloud can become an opportunity this decade for traditional storage players with multi-cloud / hybrid cloud and edge, which is becoming the new strategic play for legacy players.

Indicators to Watch in 2020

In addition to the cloud impact, to answer these questions we’ll be watching several trends as shown below. 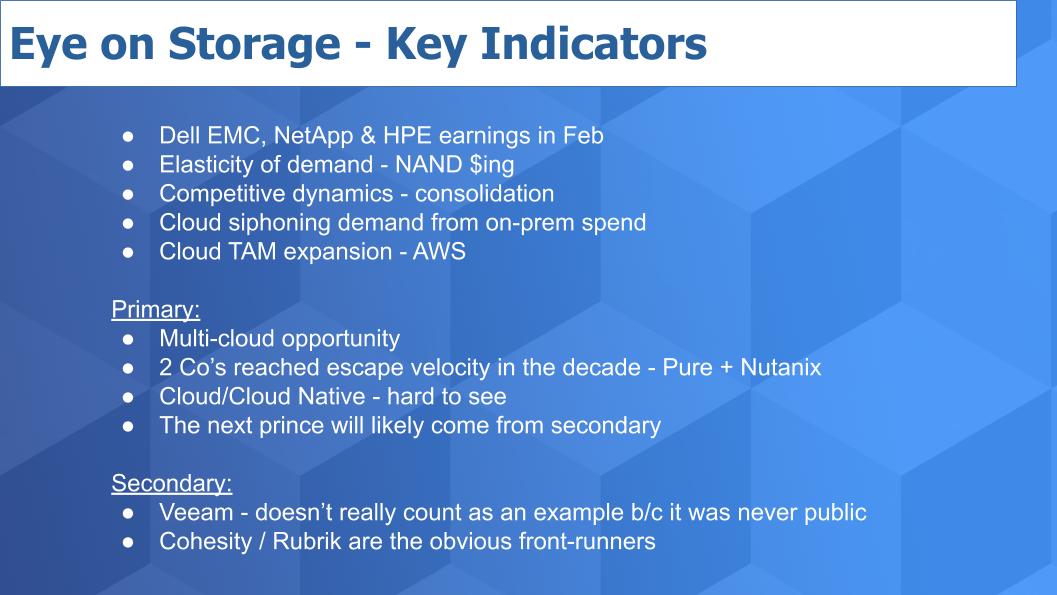 Several large players announce earnings in February and we’ll see how the results compare to the ETR spending indications.

Elasticity of demand is a biggie. Pure and others have cited a drop in NAND pricing has hurt their business growth. We believe the market is elastic and as NAND prices drop two things will eventually occur: 1) buyers will spend more on storage; 2) flash as a percentage of the market will grow. It is estimated that flash comprises be 20% of the terabyte volume today and 30% of the revenue in the storage market. But this shift may take longer than anticipated for the factors mentioned earlier.

Consolidation in the market continues as Dell EMC rationalizes its portfolio to be more cost effective. As well Pure, Cisco and others have cited global demand issues which make share gains all the more important.

We’re also watching the cloud players expand their storage portfolios. Much of AWS’ business last decade came from compute and AWS is a huge Intel customer, meaning, like other providers of compute, AWS is paying a large proportion of its revenue to Intel. In part, it’s why AWS has invested in developing its own chips. Servers is a relatively low gross margin business – in the 20 – 30% range.

Alternatively, storage is a high gross margin business. As an example, Pure’s gross margin topped 70% last quarter and the industry has consistently delivered gross margin in 60%+ range. We believe AWS and other cloud suppliers are seeing the storage light and will be much more aggressive this decade in expanding their storage TAM.

This past decade only two companies achieved escape velocity – Pure and Nutanix. Fusion-IO, Violin and Tintri got to IPO and flamed out. Solidfire had a decent exit with NetApp but only Pure and Nutanix made it to $1B valuations and maintained that level as public companies.

Will the next new big player come from the data protection world? Rubrik and Cohesity are the likely front runners right now. Some may consider Veeam having reached escape velocity with a $5B exit but we’re looking for a more transparent candidate and ideally a public company. Perhaps one will emerge from the cloud native crowd but it’s somewhat difficult to see a company positioned to either create a new market or highly disrupt an existing one – versus an acquisition target – at this point in time.

We’ll check back post earnings season, in the meantime we hope this data serves as a barometer that we can track over time. 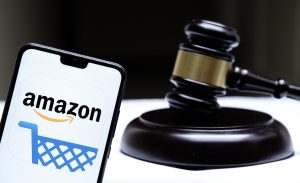 Breaking Analysis: Break up Amazon? Survey Suggests it May Not be Necessary 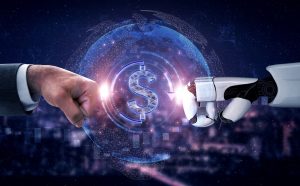 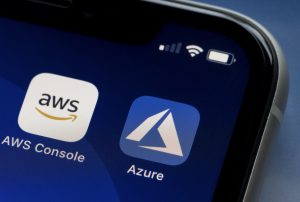