In recent Wikibon research Software-led Infrastructure was defined. One component of that vision was Software-led Storage, as presented in Figure 1. 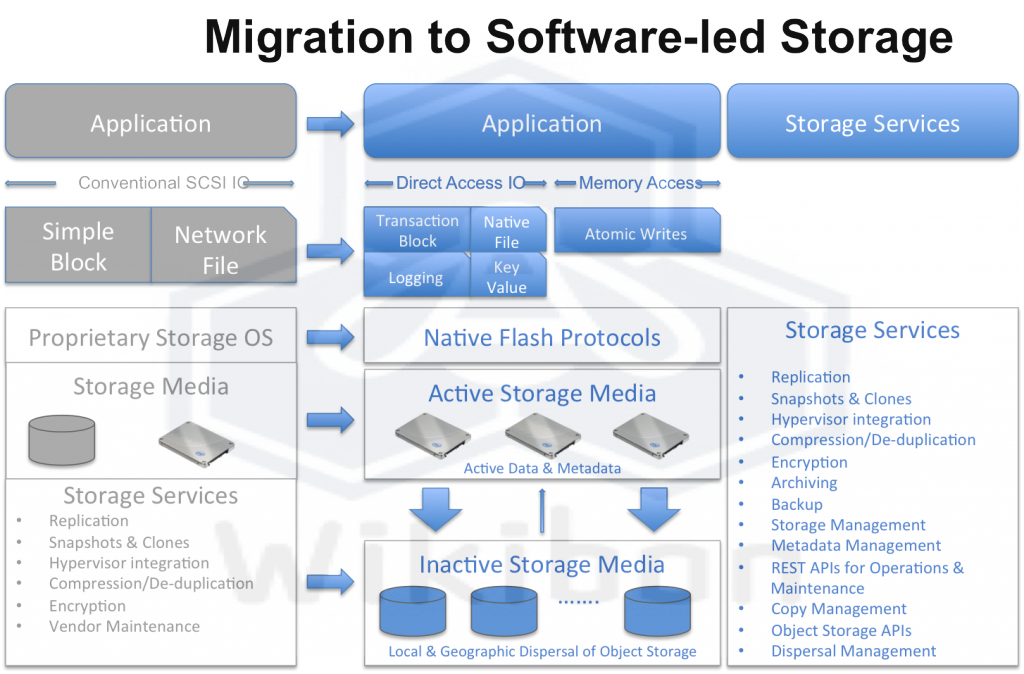 The current storage topology is shown in the left-hand column of Figure 1. The application requests IO using either block or network file protocols. Each storage array is the source of software services, including replication, snapshots, clones, encryption, and data reduction. Each of these services then has to be managed across the infrastructure. Many such as de-duplication, compression and encryption, need to be undone and redone (dehydrated and rehydrated) when data is accessed or moved.

The major constraints of current larger-scale storage infrastructures shown in Figure 1 include impacts on equipment cost, IT productivity, system availability and system performance, because of:

A framework for Software-led Storage, together with services from unified metadata about system, application, and storage, will allow much more flexible and manageable storage topologies to be created and maintained. Wikibon has consistently forecast that as the relative cost of flash continues to improve against HDDs, and the performance of flash blows past HDD performance for sequential data, all active storage in the larger-sized data centers will be held on Flash, as well as the metadata for all data.

The second column in Figure 1 shows improved native flash protocols for addressing flash. These protocols have emerged from companies such as Fusion-io and Virident and will be further refined. These allow consistent IO response time to go from the low milliseconds of current SSDs to sub-100 microseconds for PCIe attached storage. Improved PCIe functionality and erasure coding techniques across multiple processors will allow shared storage with no single point of failure at the server level.

Column three also shows the storage services available to applications, file systems and databases that will allow end-to-end encryption and security, end-to-end de-duplication and compressions and system-wide management of data snapshots and clones. The storage management services will allow migration of data between active data on flash and passive data on magnetic media. The magnetic data could be on disk or tape.

The most important areas of improvement will come from:

The migration to Software-led Infrastructure and within that to Software-led Storage has started, and the journey will continue over the next five to ten years. It is making it’s appearance in the IT giants of Google, Facebook, Federal Systems, Microsoft, Yahoo and Apple. It will be initially adopted by large service providers and in organizations that can take most advantage of increased access to data, the Negroponte bit-orientated organizations.