Wikibon looked at the state of the art for hybrid clouds in a recent research posting called “Beyond Virtualization: from Consolidation to Orchestration and Automation”. The general conclusions were that:

As a result of our findings, we have focused our new research on evaluating:

VMware is building a strong product based on its virtualization of processors, networking, and storage. Wikibon believes the relatively high cost of the VMware ecosystem software may be justified for mission-critical workloads, but there are many workloads where lower cost infrastructure hardware and software will be adequate.

Wikibon consulted with all the major infrastructure vendors about their hybrid cloud strategies in general, but drilled down specifically for their VMware-related offerings. We found that there was significant commitment for hybrid cloud from all the vendors, and that enterprise IT should be confident that hybrid clouds will available from multiple sources. The following is a snapshot of the hybrid cloud status of each vendor interviewed as of October 2014. Wikibon plans to update this section as new capabilities and strategies are unveiled.

Wikibon believes that EMC has developed a strong hybrid cloud strategy based on VMware’s private and public cloud products, and has shown significant innovation in bring it to market. At the same time, EMC has realized that greater flexibility of public cloud access is required and has made significant extensions to VMware software to enable access to AWS, Azure, and other clouds. EMC’s ViPR strategy enables the use of existing storage and data protection services. However, EMC’s approach is a high cost/high value and they may have difficulty gaining traction growth areas such as Big Data, the Internet-of-Things (Industrial Internet), and other data-rich environments without significantly lowering costs.

Wikibon believes that vVols is a significant innovation. However, if EMC and/or VMware tries to extract software revenue or strategic positioning with this intellectual property, it will doom the market to fragmentation and slow down system sales for EMC and the market. Wikibon recommends senior executives insist EMC embraces truly open API standards. Wikibon believes that such EMC leadership will allow the industry and itself to resume growth through economies-of-scale.

Overall, Wikibon believes that EMC has invested well and has a clear lead of one-to-two years in providing a framework to a hybrid cloud that meets the imperative of being competitive with best-of-breed cloud services providers.

Wikibon believes HP’s cloud strategy is aggressive and low-cost. HP will need to provide easy migration from VMware and other infrastructure platforms to OpenStack, and will need to develop data-protection orchestration and automation strategies which allow the migration of existing non-HP data protection services. HP will also need to internationalize its current US-centric approach and provide more fail-over capabilities within regions.

IBM’s biggest strengths include the size of its data center installed base and a combined open source and proprietary software strategy. It also has best-of-breed development and infrastructure software. Open source projects are the equivalent of new standards bodies which will be proven out by adoption. IBM could put forward system-wide standards. Wikibon believes IBM’s biggest challenges are cross-divisional synergy and time-to-market execution.

Wikibon believes NetApp has a clear vision of how it can contribute to orchestration and automation in hybrid clouds, has contributed innovation, and has an ambitious plan to execute. Wikibon believes NetApp can and should invest in providing one-click templates for Oracle and Microsoft SQL (for instance) databases and utilize the correct blend of snapshots, backup and recovery orchestration, and automation according to the capabilities of the NetApp storage and storage services. This would improve time to value for users. ISVs, service providers and enterprise professionals can always provide feedback and improve these templates.

In addition to characterizing the overall offerings and strategies of the hybrid cloud storage vendors, Wikibon sharpened its focus by examining the components and specific capabilities that each vendor offers to meet the requirements for a successful VMware IT shop implementation of hybrid cloud. These capabilities include enabling:

Operationalizing these capabilities, mapping them across products, and grading the offerings is clearly challenging. Wikibon proceeded in the following manner to complete this task.

An example from Table Footnote-3 is for the VMware O&A Interfaces group  (Max 25 Points) illustrates the scoring process. The items from the example are:

If a vendor offered full vOA (100%) VMware O&A Interface for every feature on the list, they could achieve a maximum score of 59. We took each vendor’s actual score for the O&A Interface segment and divided it by 59 to derive their raw percentage score for the VMware O&A interface category. If a vendor had 40 points out of a possible 59, their raw score would be 67.8% of the VMware O&A Interface segment. Since the weighting of the overall VMware O&A interface segment for the entire analysis was 25 points at most, the vendor’s score for this segments would be 67.8% of 25 or 16.9 points. This process was repeated for each of the three overall segments to derive the final scores. The factors leading to the scores are listed in Table Footnote-1, Table Footnote-2 and Table-3 in the Footnotes below, for all the five vendors interviewed.

The results of the analysis are shown in Figure 1 in the next section.

Wikibon’s assessment of Storage Vendor VMware Orchestration & Automation from a Hybrid Cloud Perspective is shown in Figure 1 below. 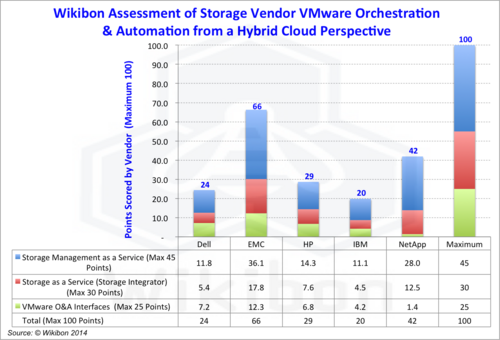 Figure 1: The Wikibon Assessment of Storage Vendor VMware Orchestration & Automation from a Hybrid Cloud Perspective
Source: © Wikibon, 2014. Scoring is based on the methodology outline in the section above, and on the information given by the vendors and tabulated in tables Footnote-1,-2 & -3 in the Footnotes below. Scoring is based on 100% of maximum score for solutions using the VMware vC Orchestration & Automation APIs (vOA). Use of other Vmware approaches (vCenter Plug-ins, IBM’s VSC (Virtual Storage Center), NetApp’s vCon (Virtual Console) or VCAC with WFA (NetApp’s Workflow Automation) score 66.7% of maximum score. Solutions using services score 33.3%. Scores with no plans score zero. The scores are normalized to a maximum score of 100.

Figure 1 shows that EMC is currently leading the charge in meeting VMware shop hybrid cloud requirements with a score of 66% of maximum and is on a firm path to provide a VMware hybrid cloud with the ability to utilize existing infrastructure. EMC’s main area for improvement would be in providing more functional workload and application templates. NetApp with 42% scores well in the Storage Management as a Service and Storage as a Service (Storage Integration) sections, with good innovative features that will work well with service providers in mega-datacenters. Wikibon believes NetApp should take a greater role in providing application and workload templates. HP(29%) and IBM(20%) have put greater emphasis on other platforms and other virtualization hypervisors, and less on VMware. Time will tell if this strategy works well, since VMware is the key infrastructure framework for many enterprise IT installations. Wikibon would recommend their applying a higher level of resource to this area. Dell scored 24% with a focus on using simpler vCenter plug-ins and pull-down menus – an approach that is very viable for the small and medium IT shops.

Wikibon would emphasize that we are early in the game, and that infrastructure executives should evaluate the importance of the elements in this analysis for their own installation. Enterprises that want to look at their relative weighting and importance scores for their implementation are welcome to contact Wikibon about running a personalized enterprise evaluation.

Action Item: Wikibon believes that infrastructure executives should put in place as a strategic imperative a hybrid cloud strategy, with the ability to migrate workloads and applications between private and public clouds, and between alternative public clouds. The persistent storage component of hybrid cloud is the most important area for executive focus.

Although it is early in the game, many vendors are committed to providing different strategies and solutions. VMware is well served in this emerging hybrid cloud market, with the EMC federation investing early and strongly.

Wikibon would also recommend that other lower-cost hybrid solutions should be evaluated for workloads with less stringent performance and availability requirements.

Footnotes: Tables Footnote 1,2 & 3 are below, and are the source for the evaluation scores in Figure 1 above. Table Footnote 4 shows the new terminology that VMware is now using to rebrand its cloud strategy, together with the more familiar original names. 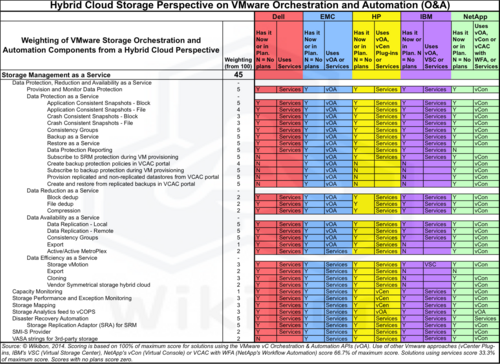 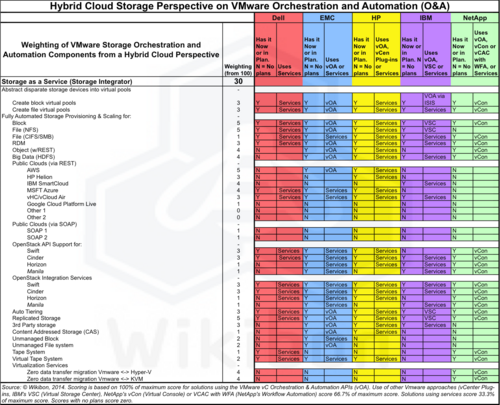 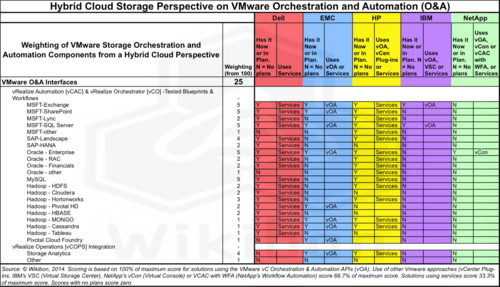 Table Footnote-4: Rebranding of VMware’s Orchestration and Automation Cloud Products (vCAC); New Names & Old
Source: © Wikibon, 2014. The old names have been used in this research to aid readers (and researchers) familiar with this area.

Figures Footnote-1 to 4 are diagram to help explain the positioning of VMware’s orchestration and automation software components. 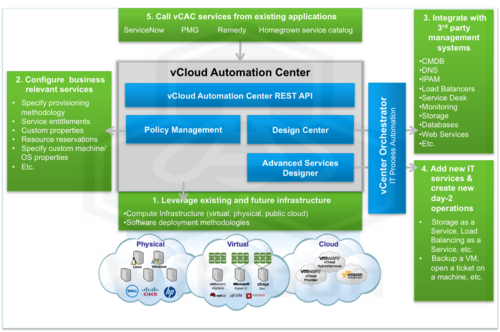 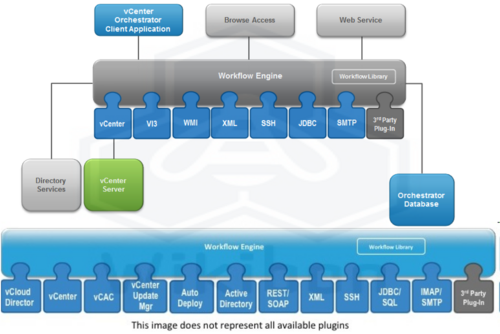 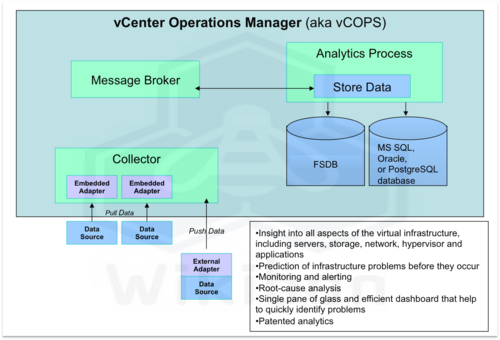 Java for Mid-size Enterprises: On-premises & in the Cloud