Impact of the IBM Lenovo Agreement on PureSystems, Storage and Beyond

In an interview on theCUBE at IBM Pulse, Steve Mills, Senior Vice President & Group Executive of IBM Software & Systems, said that the strategy of moving x86 to Lenovo was a response to shrinking margins and a market with little opportunity for differentiation. IBM is looking to cloud solutions built around Softlayer to be a growth market. Almost a decade after selling the personal PC division to IBM, the server deal has much greater ramifications as the enterprise portfolio is more complex, with intertwining solutions that cross the boundaries of the companies.

The story is summarized in the graphic below, which shows the impact of these problems on the Integrated Systems group:

IBM PureSystems is a family of Integrated Systems including PureFlex that provides converged infrastructure, PureApplication systems designed for transactional Web and database applications, and PureData systems for analytics and Big Data solutions. PureFlex can support both x86 and Power chipsets; the x86-only configurations will now be sold under the Lenovo brand, Power-only or Hybrid x86/Power configurations will be sold under IBM. All storage solutions remain IBM branded and will be OEMed to Lenovo for PureFlex. IBM’s network switch hardware was sold to Lenovo as part of the acquisition and will be OEMed to IBM. IBM, Lenovo and its channel partners will need to work to avoid conflicting sales motions or lack of focus if the companies are to successfully compete in the fast-growth converged infrastructure market.

As stated above, IBM maintains control of the storage portfolio. However, as requirements for low-latency with flash and new architectures like Server SAN bring compute and storage together, IBM will need to make sure that storage is not isolated from compute groups. In an initial analysis of selling the x86 business, Wikibon CTO David Floyer was concerned that IBM loses an important component of integrating a solution from application through infrastructure. IBM is increasing the use of Power architectures including Power in Softlayer and participation from Google and Canonical in the Open Power Foundation. IBM and Lenovo have also noted that the relationship will not impact the Lenovo-EMC partnership which focuses on the SMB NAS market.

The Future of Servers

Lenovo has become a leader in PCs and now has a new opportunity to rejuvinate sales for a product line that has had steep declines in recent years. The only growth in the market recently has been from Cisco, which attacked IBM’s previous leadership for high performance x86, and ODMs like Quanta that are poised to eat the entire server market at low margins. Blade servers have likely seen the peak of usage as scale-out architectures gain adoption. Lenovo and other server manufactures have the difficult challenge of continuing innovate on the compute layer to provide enough differentiation from low-cost alternatives. 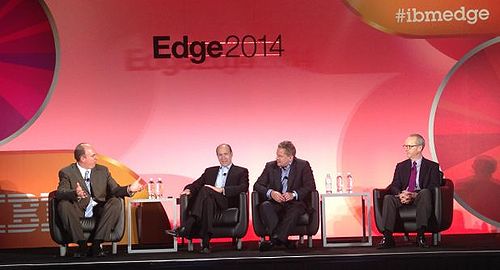 On May 20, 2014 at IBM Edge, Wikibon’s Stu Miniman hosted a panel (pictured above) with Adalio Sanchez, GM of IBM System X, Christian Teismann, Lenovo GM of Global Accounts, and Charlie Cox, President of Technology Infrastructure Solutions, Datatrend Technologies (the largest IBM PureFlex reseller in North America) to discuss this transaction. While it is natural that there are plenty of questions and some concerns from customers, partners and even employees – most of the 7,500 employees that will move from IBM to Lenovo are excited about the opportunity to move since they will now be the high margin product in the portfolio with a new goal of claiming #1 in market share.

A hot topic that came out of the candid discussion was that Lenovo will have the opportunity to deepen partnerships with ISVs that might have been concerned about conflict with IBM. This is especially true for the Microsoft and VMware relationships; particularly in light of VMware looking for partners to help battle against Cisco, now thatJohn Chambers has declared that VMware is enemy #1. The Cisco/VMware battle was alsodiscussed on theCUBE from the event. Lenovo has its work cut out for it to find growth in a marketplace that isn’t growing while trying to fight against Cisco on the high-end and Quanta on the low-end.

Action Item: Users are in the driver’s seat for this transition. IBM and Lenovo have a track record of providing a solid transition for users. IBM, Lenovo and competitors will all be working to gain the trust and business of customers, which gives users leverage in negotiations.