Wikibon believes that the traditional data center as we know it, for most organizations, will not exist within ten years, even in the largest enterprises of the world. What will remain are enterprise IT control centers; the data processing will be executed in mega-datacenters, and the data, (all the data), will be stored in these mega-datacenters. Alongside will be the data from cloud service providers and data aggregators, as well as multiple communication vendors with state-of-the-art long distance communication to users, partners, suppliers and other mega-datacenters.

The underpinning of mega-datacenters will be a software-led infrastructure (software-defined) where compute, storage and network functionality will be provided by layers of control software running on commodity hardware. For example, storage will be located close to the servers in a Server SAN model, rather than the traditional network storage model of function based on proprietary code locked within storage arrays. The former will support applications horizontally across the application portfolio, whereas the latter requires purpose-built stacks on an application by application basis.

The benefits of choosing a software-led, industry relevant and properly set-up mega-datacenter, are much lower costs of IT management compared with today, as well as the ability to access vast amounts of Internet and industrial Internet data at local datacenter speed & bandwidth. This capability will likely spur IT spending globally, as there will be strong opportunities for early adopters to invest in new IT techniques to decrease overall business costs and increase revenues.

Wikibon believes that successful enterprises will aggressively adopt a mega-datacenter strategy that fits their business objectives within their industry. Effective enterprise IT leaders will increasingly exit the business of assembling IT infrastructure to run applications, and the business of trouble-shooting ISV software issues. Successful CIOs will move to position their enterprises to exploit the data avalanche from the Internet and industrial Internet and enable real-time data analytics.

Figure 1 below shows the likely key components and topology of a future enterprise datacenter. 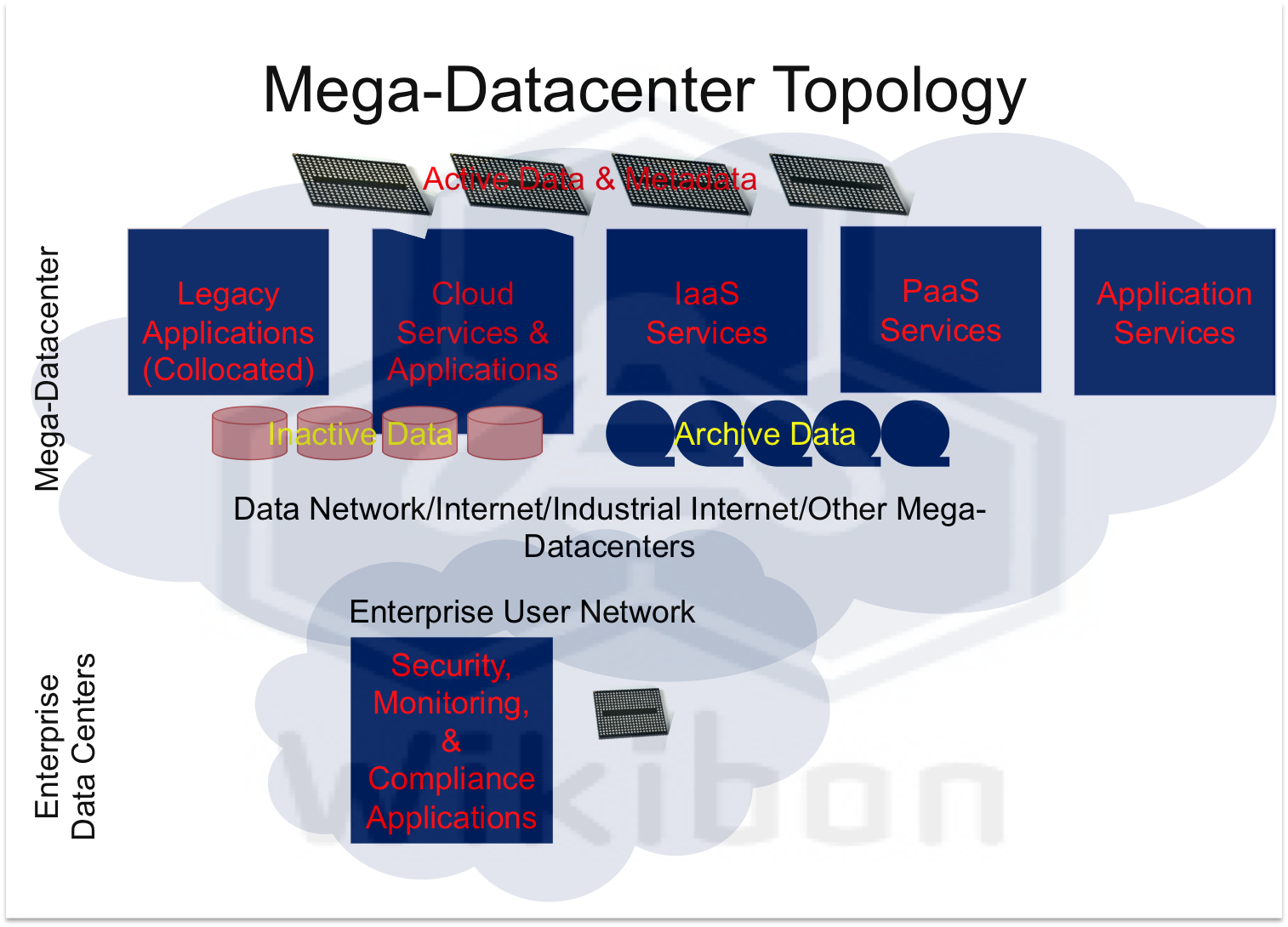 The top layer in Figure 1 shows the active data and metadata distributed held mainly in flash storage positioned close to the servers. The technology used is very likely to be based on aServer SAN model deployed across the servers using high speed interconnects. The legacy applications that are working well will run on the original configuration using a collocation model within the mega-datacenter, allowing back-hauling data to and from other cloud, IaaS or PaaS applications within the metadata center.

The key challenges to today’s IT datacenters include: 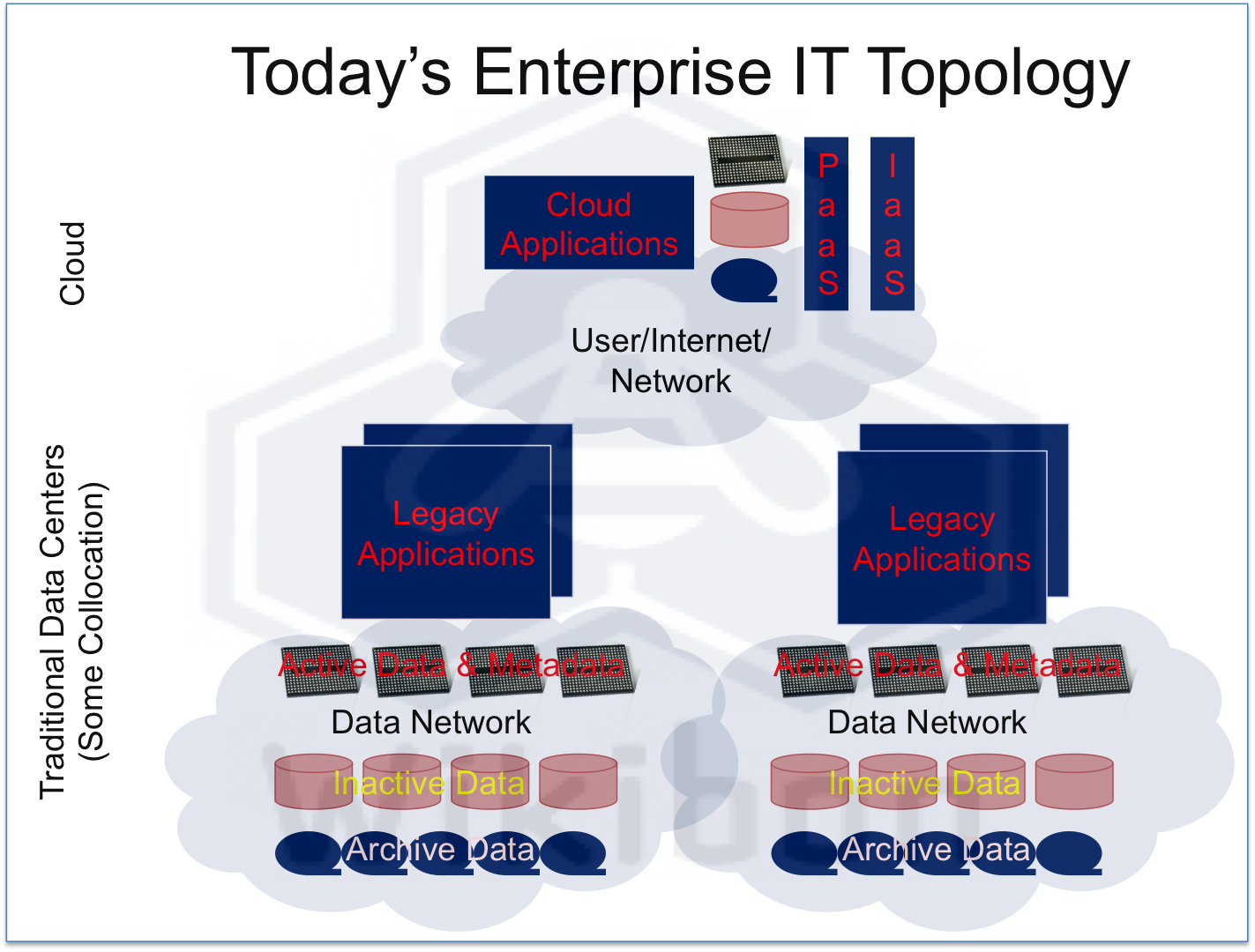 The software defined datacenter is likely to be the key ingredient of future datacenter infrastructure. Very likely components of software defined data centers are open hardware stacks (e.g., Open Compute Project) and open software stacks (e.g., OpenStack). For example, a combination of OCP and OpenStack together, combined with a datacenter integration and orchestration layer that will optimize a facility’s infrastructure power and cooling provide a powerful base for next-generation cloud infrastructure. This set of technologies would ensure a low-cost automated and integrated software-defined infrastructure which will enable Mega-datacenters to provide an ideal platform for Infrastructure-as-a-Service (IaaS) and Platform-as-a-Service (PaaS) offerings to enterprises, cloud service providers and government organizations. This will enable Mega-datacenter services to be formidable competitors to cloud service providers such as AWS and traditional system vendors offering cloud services such as HP, IBM, Oracle, etc.

Importantly, while many vendors talk about the software-defined data center, many ignore the data center itself. The true “Cloud OS” of the future will control not only server, storage and network resources, but also allow orchestration of facilities infrastructure as well. Specifically, we are referring to power, cooling/chillers, lighting, routing of connectivity infrastructure, etc.

The next section looks at why the Mega-datacenter is the future.

The reasons for this coming sea change are:

The are many US-based and international mega-datacenter providers, such as Equinix, IBM, IO, and Switch (SuperNAP). The selection critia include the ability to:

Will All Computing Occur In Mega Data Centers?

The industrial Internet and the Internet of Things (IoT) underscore the clear answer here is no. Many distributed facilities will require local computing and data center infrastructure – e.g. utilities, factories, warehouses, etc. There will be three main differences in the future with regard to this infrastructure:

This “end-to-end” view of data center resources, we believe, will increasingly become a fundamental staple of IT.

Wikibon strongly believes that the traditional data center for most organizations will radically change over the next decade from one that is stovepiped and hardware-centric to an environment that is software-led. The current topology and organization will not sustain the potential opportunities for exploiting IT, even in the largest enterprises of the world. Unless a new topology is aggressively adopted, line-of-business executives will go their own way and adopt cloud-based services. For some very loosely based organizations, this can be an effective strategy. However, most medium-to-large organizations have a strong core of shared IT services and data standards, which will be difficult to impossible to retrofit after each line-of-business has independently chosen its IT strategy.

Outsourcing every existing application to the cloud is a flawed strategy for all but the smallest organizations. So-called legacy applications usually work well, and converting them to run in the cloud is a risky and usually unnecessary strategy. Wikibon has personally reviewed the almost fatal conversion of core applications at banks and insurance companies, where the conversion stalled and nearly bankrupted the companies. The easiest way to bring legacy applications forward is to collocate the data in the same mega-datacenter that houses the new home-grown and cloud applications. This way data can be moved efficiently between applications. Wikibon recommends that organizations should keep what remains in the enterprise IT control centers to a minimum. There is likely to be strong pressure from uninformed heads of lines-of-business and uninformed CXOs to keep some core processing in house. This should not be accepted as a business requirement, and IT should educate senior business executives on the realities of risk and the cost of not embracing the mega-datacenter strategy.

The benefits of choosing an industry relevant and properly set-up mega-datacenters are much lower costs of IT management compared with today, as well as the ability to access vast amounts of Internet and industrial Internet data by back-hauling the data with the mega-datacenter at local datacenter speed and bandwidth.

Wikibon believes that successful enterprises will be aggressive and early adopters of a mega-datacenter strategy. The choice of mega-datacenter is important and should fit the business objectives within the organization’s industry. For companies with international data centers, the mega-datacenters should offer sufficient locations overseas, or partner with others to provide worldwide coverage, to ensure compliance with international data laws. IT management should set out a timescale for exiting the business of assembling IT infrastructure to run applications and the business of trouble-shooting ISV software issues. Figures 1 and Figure 2 show there will be usually be a requirement to reorganize IT along application lines and towards Dev/Ops and/or Dev/Cloud models.

Perhaps most important of all, CIOs should have a clear idea of how new technologies such as hyperscale, in-memory databases, flash and metadata models can change database and application system design forever. Successful CIOs will move to position their enterprises to exploit the data avalanche from the Internet and industrial Internet and enable real-time data analytics. These capabilities will probably increase the overall IT budget over the next decade by a few percentage points of revenue, as there will be an strong opportunities for early adopters to invest in new IT techniques to decrease overall business costs and increase revenues.

Action Item: CIOs and CXOs should aggressively adopt a mega-datacenter strategy that fits their business objectives within their industry. Enterprise IT should exit the business of assembling IT infrastructure to run applications and the business of trouble-shooting ISV software issues. The focus of IT should move to positioning the enterprise to exploit the data avalanche from the Internet and industrial Internet, and enable real-time analytics.

Footnotes: Note 1
PUE (Power usage effectiveness) is defined by the Green Grid as Total Facility Energy/IT Equipment Energy, where a perfect score of 1 (100% efficiency) is achieved if all the power is going to IT equipment and none wasted. The problem with the definition of this metric is that IT equipment includes components such as fans and power supplies which should be in the denominator, as they do not provide IT compute power. As a result, PUEs of 1 or even lower than 1 are claimed. A True PUE would correct for this as discussed by Wikibon in Fanning the DCiE Metric Controversy (DCiE is 1/PUE) 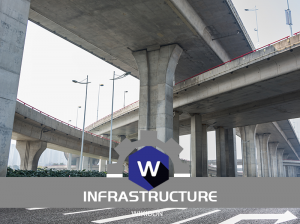 The Next Decade of Java

Oracle Ups its Game with Gen 2 Exadata Cloud at Customer