I recently heard a question that I thought was particularly interesting: “Why do vendors claiming to provide software defined storage only ship with hardware?” There are actually a number of reasons, and, frankly, I wouldn’t have it any other way.

First of all, just because a service is described as being defined or led by software, does not mean that the hardware simply disappears from the 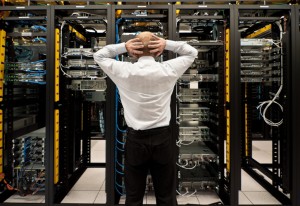 equation. The hardware plays and will continue to play a vital role in the data center life cycle. What will change is the type of hardware in use. Rather than hardware that is customized to a single use, as more functionality is moved into software the hardware becomes more generic and can be more easily replaced. One of the hallmarks of the software-led movement is its reliance on commodity, off-the-shelf hardware as opposed to custom ASICs and proprietary hardware development.

In addition to helping bring down the overall cost of a solution, using commodity hardware allows vendors to focus on the software layer rather than on both hardware and software. This focus on software enables a deeper focus on that front and more flexibility over time since it is much easier to rewrite code than to replace hardware components.

Just because software- led infrastructure makes use of commodity hardware, it doesn’t mean that customers can just go into the parts room and build a new data center out of junk in an effort to build the cheapest environment possible. In fact, although cost reduction is often a benefit in software-led solutions, there still needs to be a focus on hardware quality. The old adage “you get what you pay for” is absolutely true.

This is a primary reason that many of today’s SDS vendors, such as Scale Computing, Nutanix and SimpliVity, sell their solutions as hardware/software bundles. By supporting just the hardware that each company has selected, the vendor support organizations have a clear baseline of operations. The support team knows the hardware inside and out and can provide the best possible service for that hardware.

Can you imagine the chaos that would ensue at a company like Nutanix or SimpliVity if it had to support anything that could be found at Best Buy or that exists on VMware’s Hardware Compatibility List? It would be very bad for support, and it would be even worse for customers. So, in this sense, allowing the vendors to choose the hardware platform makes a whole lot of sense. It may cost a lot more than simply rolling your own, but the outcomes are immeasurable.

Even a hardware compatibility list counts as hardware bundling

Of course, some companies do sell just software solutions to address storage. Perhaps the most common name in this space is Nexanta. Some believe that Nexenta truly is just a software play. However, when it comes to production systems, I beg to differ. Nexenta still maintains a hardware compatibility list that includes fully certified configurations and reference architectures from companies such as Dell. So, in essence even though customers buy the hardware and software separately, they’re not going out to NewEgg and just adding the cheapest possible storage components to their cart.

That’s really important to understand. Although SDS should result in some lowered costs, it doesn’t mean that the floodgates are open to cheapening out on the storage layer. Regardless of the kind of storage being purchased, it still has to support the entirety of the data center. If you buy hardware that can’t keep pace, no amount of software is going to correct the issue.

Action Item: So, don’t be tempted by deals that look too good to be true, even if they sport today’s common buzzwords, like software-defined. CIOs need to make sure that selected solutions remain able to meet business needs while, at the same time, looking for ways to leverage emerging trends to reduce costs, but not at the expense of the business.