Enterprise IT has been ignited by the Digital Economy and exploded into thousands of users, devices, applications and questions:  When users are using their laptop over coffee-house wifi to look up a customer on their public cloud SaaS CRM system, before logging into email on-premises to send an invite to the customer: are they using one identity, or two?  Without a single, unique trusted identity across hybrid cloud, there is no hybrid cloud because it looks like a discombobulated and fragmented set of “stuff” to the user, whether that’s an infrastructure administrator or a business administrator.  This pounding headache has to be addressed with modern hybrid identity systems.

1. The digital economy and the drivers for modern hybrid identity systems

The experts on the interplay between the digital economy, the second machine age, platforms and the technology landscape reveal that technology is disrupting the enterprise. 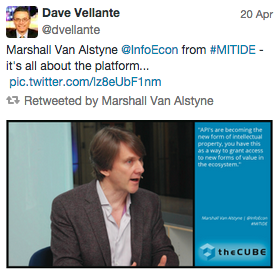 The five drivers of hybrid identity are:

1. Enterprises, such as Royal Phillips, are rejecting the traditional model of IT.  Their VP Technology, Alan Nance, described the “end of the enterprise agreement and the start of the consumption cloud”.  This is about more than just buying infrastructure in a different way: it changes the way IT is consumed, giving Royal Phillips new modes of experimentation and learning; it changes the way IT is controlled, with a particular impact on system-wide controls such as identity and access management.

2. Identity is your unique passport in the enterprise, without it you can’t work and the business won’t function.  Do it badly and there is a direct impact on the things that business cares about: innovation and productivity (difficult systems lower productivity), brand (security breaches impact brand), and costs (many disconnected, niche identity systems are not cheaper than one unified system).

3. Users should not be exposed to the churning underbelly of IT.  Users are consumers and customers in this age of the demand-driven platform, and they have expectations of service: simplicity and ease of use, beauty and design.  They have used authentication systems from Google, Twitter and LinkedIn and they expect the same level of self-service and ease of use in the enterprise.

4. IT can not cope without a hybrid identity system.  The rate of change and complexity of users, devices and applications means that without federated and self-service systems, without better intelligence and policy enforcement, IT will be inundated with tickets and calls and security will fail.

5. We are living in the age of cyberwarfare and hybrid cloud exposes a larger surface area of attack.  Old, private, internal systems are not cloud native: use an enterprise-friendly, cloud-friendly, app-friendly and user-friendly system.  It has to be easy to consume, easy to deliver and operate, and be ubiquitous and consistent to be effective.

Hybrid clouds are the new mix of on-premises and off-premises systems at all layers of infrastructure and applications: this isn’t just the slice of apps, or users, or devices, or infra; it is about the whole pie.  It is likely that one user uses many slices of this hybrid cloud pie:

Microsoft are just one of the hybrid cloud identity players, and they have a nice infographic that shows the scope of a hybrid cloud solution: 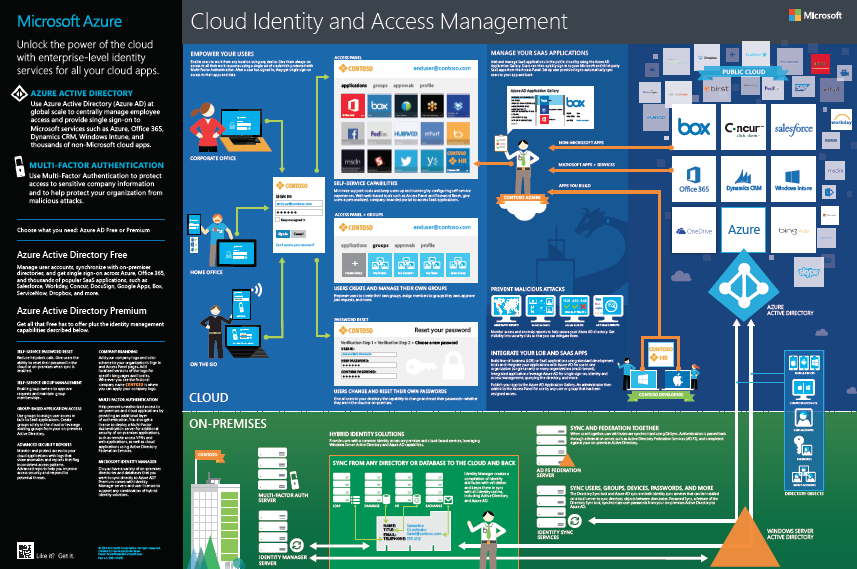 2. What modern hybrid identity systems need to do for the hybrid cloud

Identity and access management is as old as IT itself but the hybrid cloud needs a modern identity system.

There are also numerous “back end” requirements of governance, auditability and intelligence which are crucial to modern identity systems.  For example, there are some advanced systems that use intelligence algorithms to detect unusual user access behaviour, such as accessing the system from a different country or timezone.

Bring your own ID (BYOID) is a faltering concept of letting users bring a previously approved ID into the enterprise, such as their social media, 3rd party or government approved identity.  Prevailing thought is that this hasn’t worked due to lack of trust between enterprise and 3rd parties.  Even government-approved falters when an enterprise is global.  This is also an age of Snowden and zero trust so there is little near-term hope for this approach.

All of these hybrid identity features benefit the user and the administrators, here are some real situations that can be avoided by using a single, hybrid identity system in your hybrid cloud:

The identity and management discipline is decades old and it is going through a resurgence because of the impact of the digital economy, cyberwarfare and IT entropy risks.  This means there are new market entrants and traditional tech titans all playing in the spaces with varied offerings that must be carefully matched to an enterprise needs.  This list isn’t exhaustive, or in any particular order, but represents the most commonly discussed .

Take the end users perspective when it comes to identity: Where there is simplicity and ease of use, there is cohesion, trust and security.

Action needed: People and complex systems make a weak link in security so make hybrid identity the core of your hybrid cloud journey and secure your people, applications and devices.