The Pivotal Move for EMC and VMware

Can a market leader also lead a transformation? EMC is the market leader in storage and the majority owner of VMware, the market leader in server virtualization. Both companies face significant threats. This week, EMC and VMware held a joint strategic summit in NYC to try impress Wall Street that the companies have a strong future. Additionally, details were given on the “third member of the EMC federation”, Pivotal Inc. (the company formed from the Pivotal Initiative), which will launch on April 1st, 2013.

Joe Tucci, who is the Chairman of both EMC and VMware and the CEO of EMC, stated that the companies will go on offensive, and this means that it is OK for them to overlap and even compete, while the visibility and coordination will allow the combination of the companies to excel. While shifts in IT typically take years, true disruptions usually leave the incumbents behind. It’s apropos to name the new company Pivotal, as Cloud and Big Data sit at the intersection of where EMC and VMware are today and where the future of the market is going.

VMware CEO Pat Gelsinger came to the strategic forum clean-shaven to explain the trimmed down VMware strategy. Gone is the app-store for the enterprise (SlideRocket was recently sold off), while Cloud Foundry, Gemfire, Spring and Cetas all follow Paul Maritz to Pivotal. To combat the attacks of KVM and Microsoft, VMware plans to continue to release a cadence of innovations to help maintain differentiation. This strategy still leaves VMware vulnerable to erosion from the low-end of the market. VMware’s plans are to double-down on solutions that virtualize, pool, and automate the data center. The concern is that the plans can compete with both the technology and channel partners that created the robust VMware ecosystem. Gelsinger stated that VMware is still looking to be “the best partner to work with…there will be challenges in some areas”.

VMware is focused on 3 strategies:

Tucci called VMware the “tip of the arrow” for the software-defined data center (SDDC). While VMware leveraged strong partnerships with IBM, HP, and Dell to drive server virtualization, it is unlikely to find eager vendor-partners to help drive software-defined networking (SDN) or software-defined storage (SDS) to complete the SDDC stack.

With the acquisition of Nicira, VMware bought not only a collection of technologies, but also a passionate team that is focused on radically changing networking. In the battle of IT stacks, VMware has a strong presence in today’s data centers, and Amazon is the leader in the cloud. Wikibon Chief Analyst Dave Vellante has called OpenStack the “Hail Mary” of those looking to compete with Amazon. Many in the industry watched cautiously when VMware joined last year. Today, VMware not only unveiled NSX, it’s revamped Network Virtualization Platform that converges Nicira NVP and VMware vCloud Network and Security (vCNS), but it is supplying the “full version” of Nicira to OpenStack, allowing VMware to own a good piece of the stack and management of both multi-hypervisor and multi-cloud environments.

Just as VMware is looking to extend its networking beyond VMware environments (using Open vSwitch), there has been an increase in alternative virtual switching beyond Cisco’s 1000V with IBM, NEC and more alternatives expected this year. VMware is focused on “lighthouse wins”, not revenue in 2013, for network virtualization; these are the very large service providers and financial institutions with the growth rates that can take advantage of the scale and mobility of the solution. VMware faces the inertia of the networking industry (which usually takes years if not decades to change), coopetition from partners like Cisco, Arista, and Juniper, and a rash of startups in the SDN and cloud markets including those that will leverage Open vSwitch to help customers move to non-VMware hypervisors.

On the software-defined storage front, VMware stated that it will bring a Virtual SAN solution to market later this year. This solution should extend local DAS acting as SAN, expanding the existing VSA (virtual storage appliance) solutions. This will compete with small-midrange storage solutions such as HP’s LeftHand, that is built on VSAs. VMware poses the biggest threat to storage vendors, not in the direct replacement of arrays, but rather by replicating advanced storage functions in the hypervisor (see Wikibon’s Defining Software-led Storage for potential storage services).

VMware will be launching vCloud Hybrid Service in the summer of 2013. This is supposed to make it easy for customers running VMware in data centers or private clouds to extend to a public service. VMware COO Eschenbach stated that partners will be a strong emphasis for this new offering (he believes that it will sell 80% through the channel, similar to vSphere). It does bring VMware into competition with existing service provider partners. AWikibon survey of service providers found that “Hybrid cloud adoption is rising, but hybrid cloud via federated applications is limited.” This means that VMware can not expect to charge a premium for hybrid cloud vs public cloud options. VMware didn’t provide details on where the IaaS offering will be hosted (previous VMware public cloud offerings are in the Las Vegas SwitchNAP) or who would be building or operating the environment. As VMware tries to push from private to public cloud, Amazon, Rackspace, and others are doing the reverse, with lower margins and a clear message on OpEx savings vs. VMware’s traditional CapEx message.

VMware spent very little time talking about Project Horizon and the rest of the end-user computing (EUC) solution set. VDI adoption has increased in the last year, but overall deployment is still much less than 10% of all enterprise desktops. There was a lively debate on Steve Kaplan’s blog and comment section about whether EUC in general, and VDI specifically, lack VMware’s focus.

EMC’s focus is on Information Infrastructure. The infrastructure is more than just the hardware layer for the software-defined data center. EMC spoke about Trust (the latest from its RSA division), Flash, and Software-Defined Storage.

On the flash front, EMC made the bold claim that it intends to lead the market in server flash and all-flash arrays. Dave Vellante spoke with EMC’s Flash GM, Zahid Hussain, at the summit and discusses his analysis of EMC’s flash strategy in this video. For a detailed analysis of EMC’s launch of the XtremIO all-flash array and update to server flash boards (now named XtremSF), see David Floyer’s Flash-only Arrays at Full Gallop and Dave Vellante’s Flash Wars Heat Up posts.

On the software-defined storage front, EMC said that its “Project Bourne” would be shipping by the second half of 2013. Similar to SDN, EMC’s SDS plans to abstract the control plane, which should allow for simpler management of multiple storage arrays whether they are EMC or non-EMC (including commodity storage). Amitabh Srivastava stated that while EMC’s solution would virtualize storage, it would also be able to span between the virtual and physical worlds to fix things when something goes bad. We should hear more about this offering at the EMC World annual user conference in May. 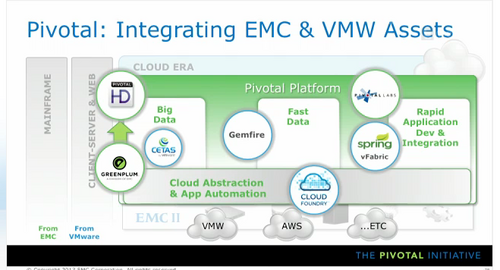 Paul Maritz’s vision for VMware was for it to become a platform company. Martiz is still marching on that path as part of the new company, Pivotal Inc. The new company is 1,250 employees strong to work on this new platform for Big Data, Fast Data and Rapid Application Development sitting on a cloud abstraction and application automation layer. EMC owns 69% of the company and brings Greenplum, Pivotal Labs, and about $400M over the next two years. VMware owns the remaining 31% and brings Cloud Foundry, Spring, Gemfire and Cetas to round out the offering. The new company is targeting $300M in 2013 revenue with a goal of over $1B by 2017. That’s an aggressive growth rate for a new marketplace; in comparison, VCE is expected to surpass $1B in 2013 with a solution that is made up of mature components with existing markets. The full “Pivotal Platform” will be completed and introduced in the second half of 2013. A VMware-style IPO for Pivotal could happen in a few years if it hits the milestones that the parent companies have set forth.

Action Item: The “EMC Federation” has a broad customer base and experienced executive bench that is looking to ride the next wave of disruption to continued growth. CIOs face a difficult transition from legacy infrastructure and applications to modern alternatives. Administrative rolls will change, and organizational structures need to be addressed for these newer solutions to be properly adopted. EMC, VMware, and the new Pivotal company are looking not only to provide best-of-breed technology, but also a trusted path to take advantage of a variety of enhanced offerings. The technology shifts and growth of service providers and cloud-based services will also change the relationship between end-users, channel, and technology suppliers. CIOs need to consider solutions that can help grow and transform the business by reducing the cost of running the business strategically.

Footnotes: This article was originally posted in March 2013.