Users know that fast and  consistent system response times from any device, application or system they are using improves their individual productivity. DBAs and storage administrators know that the vast majority of systems with very fast storage run better and take less time to manage. Moreover, flash provides more productive ways of designing systems, e.g., continuous saving of every keystroke is impossible with hard disk PCs, but is the norm in flash-based mobile devices.  And of course, when there is an IT problem, storage is generally the culprit until proven otherwise.

The objective of this research is to help executives justify faster storage, both from an IT budget and an application user productivity perspective.

Impact of Flash on IT Infrastructure Costs

Figure 1 below shows the impact of low and consistent latency on infrastructure costs with the bars representing five configurations, each with different latencies: 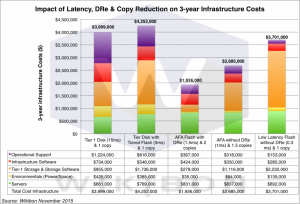 Impact of Flash on IT Database Service Costs

This section looks at the impact of IO latency on database service delivery costs. Most database software is licensed by processor core, and the three year cost of licensing and maintenance is assumed to be a modest $29,500 per processor core including all discounts. When the database costs are added to the infrastructure costs in Figure 1, the database costs dominate. The benefit of reducing the number of server cores is shown dramatically in Figure 2 below.

Lower and more consistent response time has been consistently found to improve end-user productivity. The seminal work on this issue was done in the IBM Thomas J. Watson laboratories years ago. Figure 3 shows the impact of reducing system response (the small blue bars varying from 3 seconds to 0.3 seconds) on  user response time (pink bars). The productivity impact is shown in the green line, which improves the productivity of the user from between 28% to 106% while the user is using the application.

A Wikibon case study on Revere showed an overall IT contribution to business productivity of 10%, as a function of increased revenue gained with a level headcount. These gains were from the introduction of very low latency storage. The system performance improvement allowed Revere to exploit their Epicor Eclypse ERP system more effectively, and allowed the users to be much more productive. This productivity improvement is estimated to have generated over one million dollars ($1 million) in business savings for Revere over three years, direct to the bottom line.

Table 3 in the footnotes shows the detailed business assumptions behind Figure 4 below. Figure 4 shows the results of applying these assumptions to Figure 2 above. The IT savings are taken from Figure 2.  The conservative assumptions are that the system in Figure 2 supports a revenue of $500 million, with a staff of 2,000 costing $58,000 for their average fully burdened salary. The assumption of the amount of time application users spend on the IT system is a conservative 10%, based on extensive Wikibon research in this area.

Applying these figures to the productivity improvement shown in Figure 3 above, Figure 4 shows clearly that if the lowest latency storage possible is applied to this environment that savings of over $26 million can be realized.

The assumptions made include the fact that the response time was mainly gated by IO response time, and this is true for most systems. Clearly some systems may be gated by other factors, including processor performance and network performance. Effort should be applied to reduce all the system constraints to optimize the value of the system to the business. 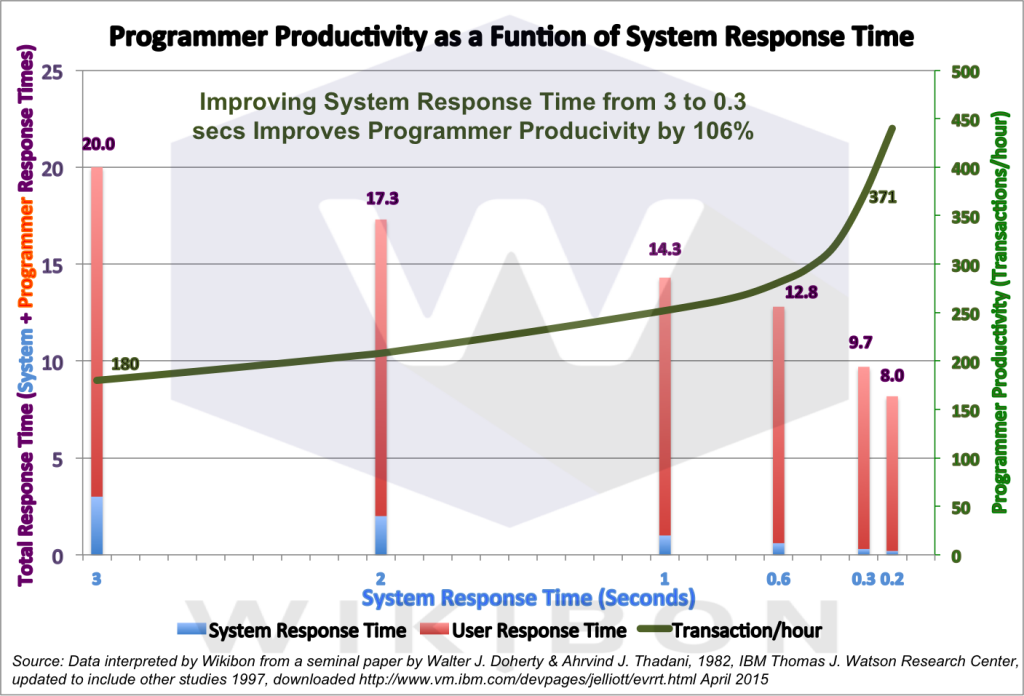 Wikibon strongly recommends that enterprises adopt an electronic data center strategy to move to an all flash storage environment (see Wikibon research on the future projections of storage costs). The starting point should be key business database systems, with an emphasis on providing the lowest storage latency. Other systems can be migrated over time as the operational ability to share physical data increases.

The assumptions behind the Figures 1 & 2 above are given in Tables 1 & 2 below. Figure 4 is supported by the assumptions and calculations in Table 3 below. 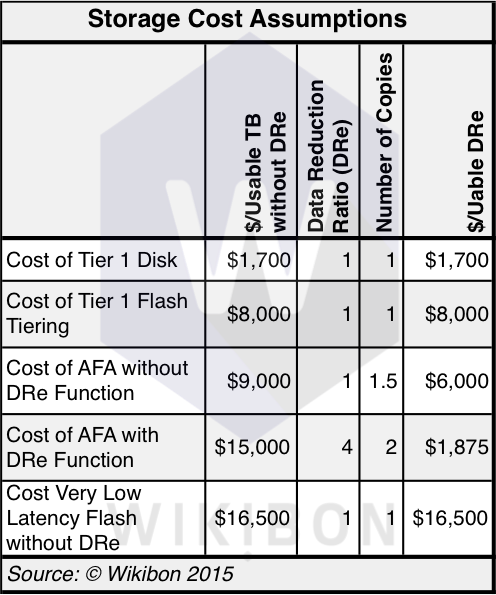 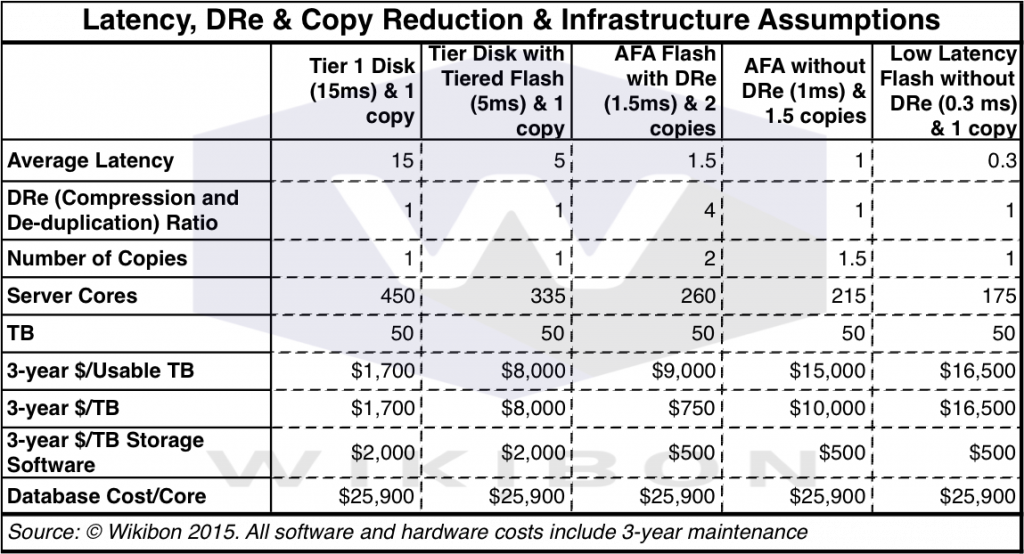 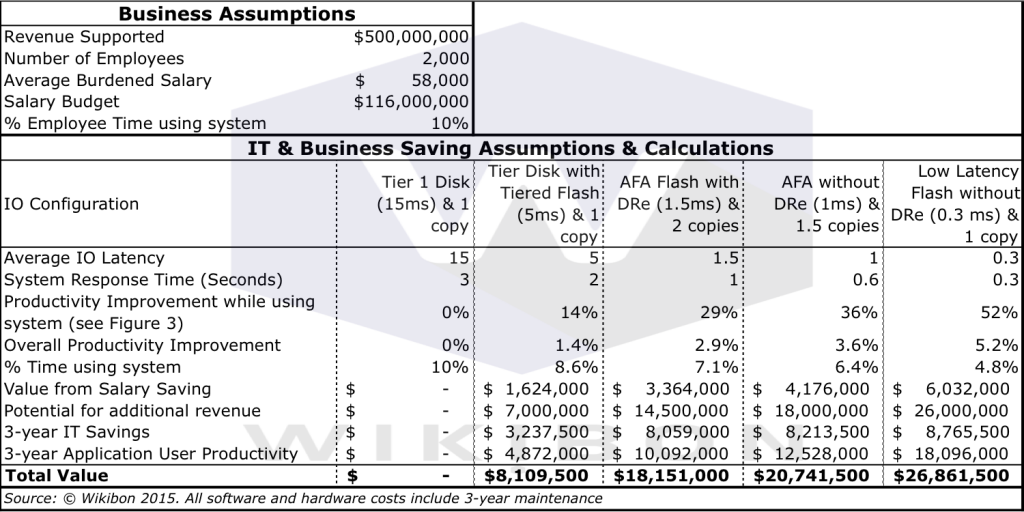