In a recent web-based survey conducted by Wikibon, 300 North American enterprises whom had either been utilizing, or considering the adoption of public cloud, answered questions regarding IaaS (Infrastructure as a Service) perceptions and usages. These questions varied in topic but were centered around an examination of which workloads were best suited for usage in the public cloud. A thorough first pass frequency analysis was published at Wikibon IaaS Survey Q1 2015 – Frequency Analysis (for Wikibon Premium clients) illustrating the mindset behind the companies who were either using, or seriously considering, stepping into the public cloud. Also see analysis on how company size affected public cloud attitudes in Embracing Public Cloud: “Try it, You’ll Like it” (for Wikibon Premium clients). This research examines a few additional key insights that shed some light on the growing IaaS world.

The first information that consistently shined through the data was the belief surrounding the future of the on-premises vs public cloud. Figure 1 below shows the predominant response that public cloud vendors will continue to be successful in the future. 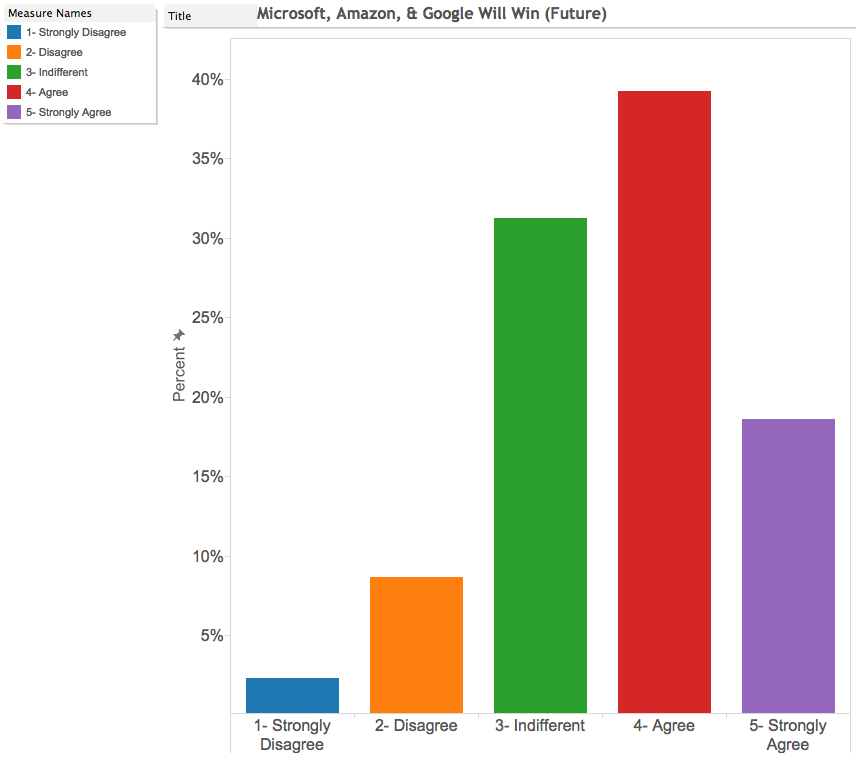 The majority of the participants felt that the writing is on the wall with regards to public cloud’s success. These responses showed that Microsoft, Amazon, and Google are not only the leaders in the market place, but are paving the way for other companies to indulge in their technology. Figure 2 provides insight on a reason behind the public cloud’s success. 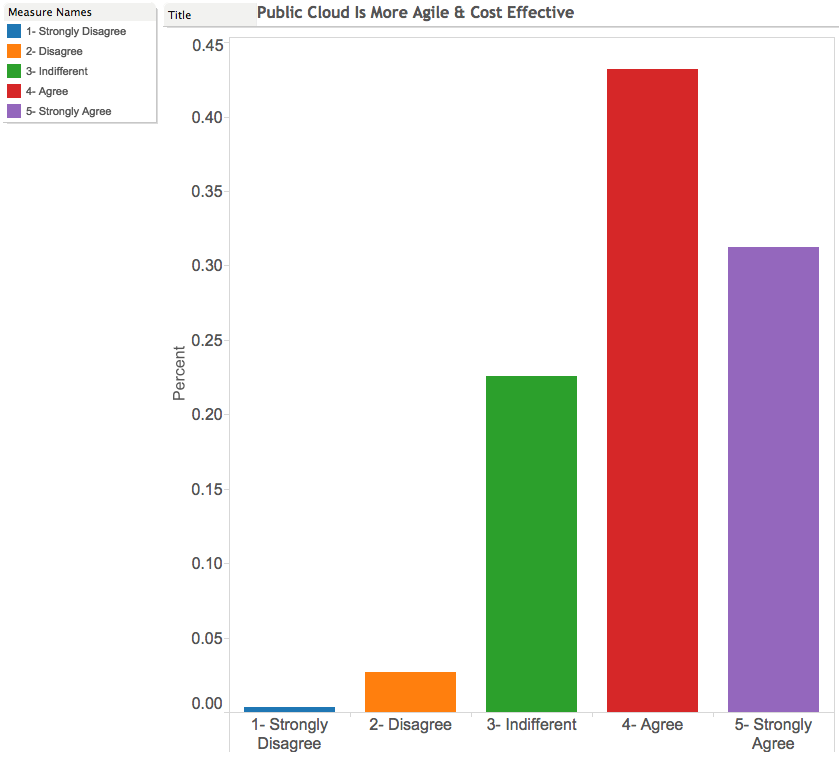 Primary drivers for success in the public cloud include the agility and cost effective nature of the services. By running applications in the cloud as opposed to an on-premises deployment, companies are able to adjust services quickly and efficiently to the specific nature and timing of that company’s demands. Continuing on with the idea of adjusted performance, the survey looked to see how important it was for companies IT infrastructure to be able to meet peak demands (and reduce/eliminate capacity/services when not in use). 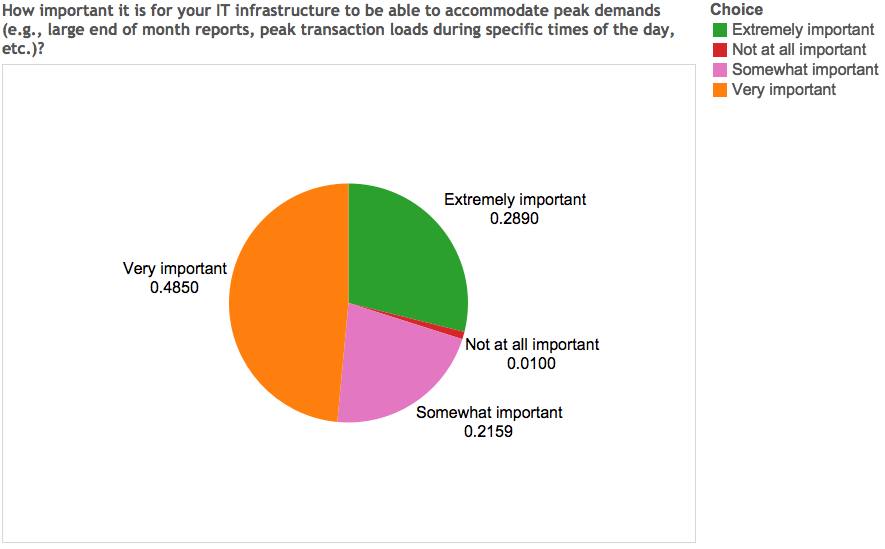 As shown in Figure 3, the overwhelming majority (77.4% of survey responders) found it very to extremely important for their IT infrastructure to be capable of accommodating peak demands. Here lies the primary advantage that comes along with the public cloud deployment. Instead of companies attempting to fund a large on-premises solution year round, they are able to use whatever they need when they need it in the public cloud. This simple difference allows companies to drastically cut costs by eliminating unnecessary spending on unused on-premises systems, and grants them the freedom to take on workload specific deployments. 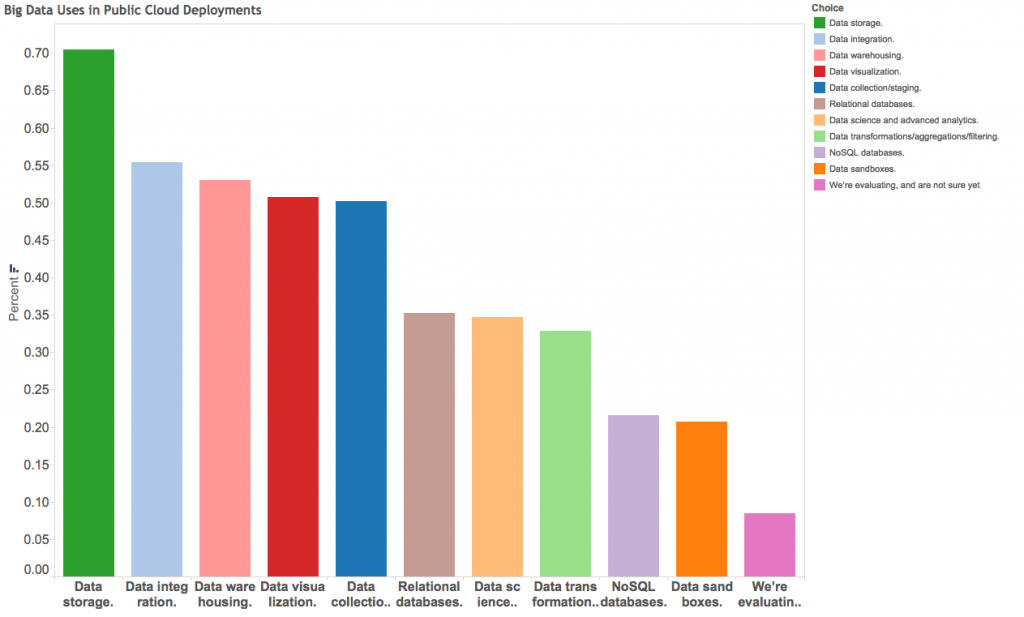 While this type of question allows for people to choose more than one answer, the overwhelming majority of use cases surround that of Data Storage, Data Warehousing, and Data Integration applications. While this may seem self explanatory, it serves as a base line for company sentiment surrounding applications of big data workloads in the public cloud. See a more in depth analysis of big data application usage in the public cloud in an earlier survey of data scientists.